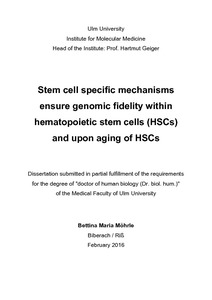 Accumulation of DNA mutations or impaired DNA damage repair upon aging has been seen as a critical causal contributor to aging of differentiated cells and stem cells and thus ultimately tissues. Experimental evidence though on the role of DNA damage and repair upon aging, however, remains controversial with respect to this paradigm. These data demonstrate an unexpected loss of the DNA damage induced G1-S checkpoint in both young and aged hematopoietic stem and progenitor cells (HSPCs). Induction of chronic double strand breaks via a zinc-finger nuclease further demonstrated that HSPCs strictly avoid accumulation of mutations by undergoing apoptosis rather than repair. Interestingly, aging does not alter the DNA damage response to DSBs in HSPCs and, most importantly, does not result in an elevated DNA mutational load in hematopoiesis in vivo upon repair of DNA damage. These data demonstrate a strong resilience of both the young and the aged hematopoietic system against acquiring DNA mutations in HSPCs in response to DNA damage, indicating an all (perfect repair) or nothing (apoptosis) approach to resolve DNA damage. These data reveal a protective mechanism in both the young and aged hematopoietic system against accumulation of mutations in response to DNA damage.