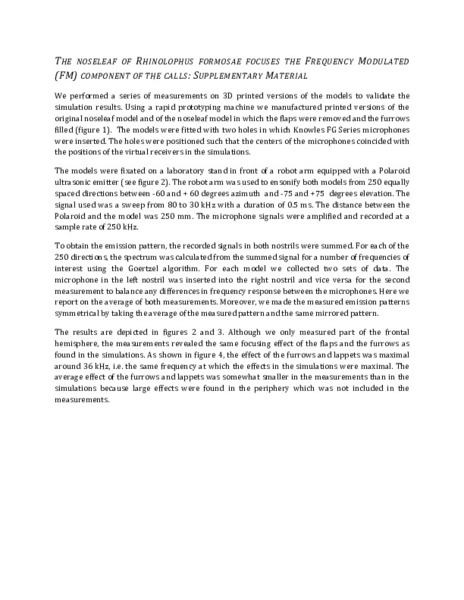 Bats of the family Rhinolophidae emit their echolocation calls through their nostrils and feature elaborate noseleaves shaping the directionality of the emissions. The calls of these bats consist of a long constant-frequency component preceded and/or followed by short frequency-modulated sweeps. While Rhinolophidae are known for their physiological specializations for processing the constant frequency part of the calls, previous evidence suggests that the noseleaves of these animals are tuned to the frequencies in the frequency modulated components of the calls. In this paper, we seek further support for this hypothesis by simulating the emission beam pattern of the bat Rhinolophus formosae. Filling the furrows of lancet and removing the basal lappets (i.e., two flaps on the noseleaf) we find that these conspicuous features of the noseleaf focus the emitted energy mostly for frequencies in the frequency-modulated components. Based on the assumption that this component of the call is used by the bats for ranging, we develop a qualitative model to assess the increase in performance due to the furrows and/or the lappets. The model confirms that both structures decrease the ambiguity in selecting relevant targets for ranging. The lappets and the furrows shape the emission beam for different spatial regions and frequency ranges. Therefore, we conclude that the presented evidence is in line with the hypothesis that different parts of the noseleaves of Rhinolophidae are tuned to different frequency ranges with at least some of the most conspicuous ones being tuned to the frequency modulated components of the calls—thus yielding strong evidence for the sensory importance of the component.