Utility maximization in life and pension Insurance : a numerical approach 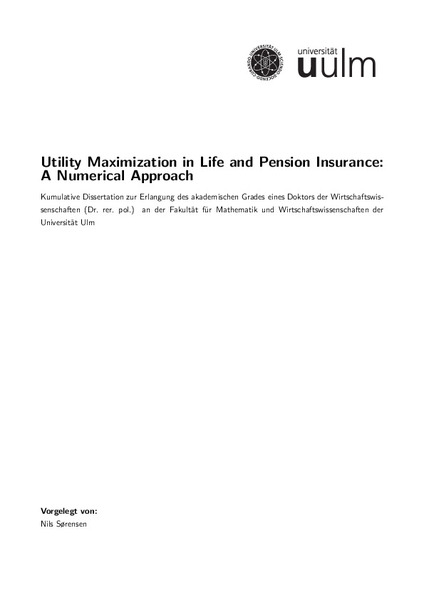 This cumulative thesis contributes to the field of optimal asset allocation in the context of indifference pricing, retirement planning and retirement consumption. Further, this thesis presents new applications of numerical algorithms to optimal expected utility problems. Optimal asset allocation problems date back to Merton (1969), who first solved this problem for the power utility in a complete market setup. Since then optimal asset allocation problems have been analyzed in numerous directions, e.g. Rouge and El Karoui (2000), Horneff et al. (2008) and many others. However, adding additional sources of risk, e.g. by untradable assets or stochastic interest rates, to these problems often lead to incomplete financial markets. Solving these problems is an ongoing challenge, as in most cases analytic solutions are not available. Pricing of claims written on untradable assets in the context of optimal asset allocation is often considered by the utility indifference pricing principle. The risk-averse agent evaluates the price such that she is indifferent between trading and not trading the claim. Utility indifference pricing problems for European-type claims have mainly been considered from a buyer perspective under power and exponential utility, see e.g. Rouge and El Karoui (2000), Henderson (2002), Henderson and Hobson (2008), Musiela and Zariphopoulou (2004), Carmona (2008). However, when taking a seller’s perspective and having short positions pricing may not be possible due to shortcomings of the power and exponential utility. Power utility can not deal with any possibility of negative wealth, while the exponential utility is not able to cope with unbounded negative payoffs, this is also often referred to as the “short call” problem, see e.g. Henderson (2002). Therefore, Chen et al. (2011) introduce a symmetric asymptotic hyperbolic absolute risk aversion (SAHARA) utility function which allows for better analytical tractability. This utility function is defined on the whole real line and yields the highest risk-aversion at a threshold wealth. The decreasing structure of the risk-aversion at very low wealth levels allows for additional flexibility in the context of pricing claims on untradable assets. The literature on retirement planning (accumulation of wealth) and consumption (decumulation of wealth) covers a wide range of topics within the three pillars (state pension, occupational pension and private pension) of retirement systems, which can be found in Germany and most other developed countries. With an aging society and low interest rates, the importance of occupational and private pension plans (second and third pillar) has increased in recent years. The question how an individual should invest her wealth when saving for retirement, is discussed in many different aspects, see e.g. Benartzi and Thaler (2001), Chen et al. (2015), Menoncin and Vigna (2017), Forsyth and Vetzal (2019). With retirement, the question arises on how to use the accumulated wealth to finance consumption. Hence, individuals need to decide on how much to consume as well as how to invest the remaining wealth. In an optimal asset allocation context this has be analyzed under various model frameworks, see e.g. Dus et al. (2005), Horneff et al. (2008). Since in most cases optimal asset allocation problems in this context do not yield analytical solutions, this thesis relies on numerical approaches to solve the underlying optimization problems. In particular, powerful numerical algorithms that can deal with multiple correlated assets are required. Further, these optimization problems can either be approached by directly approximating the resulting value function or by deriving and solving the resulting Hamilton- Jacobi-Bellmann (HJB) partial differential equation (PDE). Direct approaches use least-squares Monte Carlo methods (LSMC), see e.g. Kharroubi et al. (2014), Denault et al. (2017), while the HJB approach employs a modified finite difference scheme, see e.g. Ma and Forsyth (2016a), Ma and Forsyth (2016b). The HJB approach further needs to fulfill specific requirements to ensure convergence towards the correct solution, Barles et al. (1995). The resulting algorithms are very complex and have mostly not been applied and discussed in the literature any further.

• An Chen, Thai Nguyen, and Nils Sørensen (2021). Indifference pricing under SAHARA utility. Journal of Computational and Applied Mathematics 388: 113288. © 2021 Elsevier B.V. All rights reserved. Elsevier grants the authors to publish the article in full or in part for non-commercial purposes. https://dx.doi.org/10.1016/j.cam.2020.113288
• Frank Bosserhoff, An Chen, Nils Sørensen and Mitja Stadje (2021). On the Investment Strategies in Occupational Pension Plans. This article has been accepted for publication in Quantitative Finance, published by Taylor & Francis. https://dx.doi.org/10.2139/ssrn.3827859