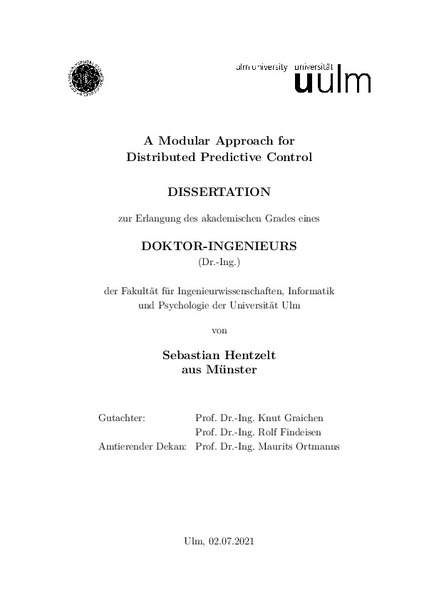 Modern production systems are increasingly interconnected and are designed in a modular way to allow for flexible reconfiguration. In control engineering terms these systems are often referred to as distributed dynamic systems. A standard approach for the design of the control system for these plants is a central approach. For this approach, the complete dynamic of the distributed system is considered for the control design. Contrary to the central control design is a decentral control design. In this approach, a controller is designed for each modular part of the system and accounts for the interactions with the other parts of the system as disturbances. As a middle ground between these two approaches distributed control has emerged. For this approach, a controller is designed for each part of the system and all controllers exchange information with each other and follow a coordination scheme. To accomplish complex control tasks with high performance model based control methods are increasingly applied in practical applications, i.e. the controller specifically incorporates a model of the system behavior. Particularly model predictive control (MPC) has become a method of choice for these situations. MPC belongs to the class of optimization based controllers, where the control objective is stated as an optimal control problem (OCP). By solving the optimization problem, the optimal control input for the system is determined. The feedback loop for MPC applications is achieved by repeatedly solving the optimization problem every time a new measurement sample of the system is available and then applying the optimal input until the next sample is available. When MPC is used in a distributed control design, it allows to naturally account for the interaction of all parts of the distributed system in the control design. In this thesis, a modular approach for a DMPC system will be presented. Each part of the system is controlled by means of an MPC, and the aggregation of the part of the system and the controller is called agent. To preserve the modular structure of the distributed dynamic system within the distributed model predictive control (DMPC), the information exchange between the agents is limited to directly coupled agents. Developing the DMPC system within these constraints allows the configuration of systems with numerous agents, while still keeping the amount of information that a single agent needs to process manageable. To develop the approach, three formulations of nonlinear dynamically coupled systems are introduced and the control problem for the DMPC is stated as an OCP. In the following, two decomposition schemes for the resulting OCPs are presented. The optimality conditions of the OCPs following from both decomposition schemes are derived. The structure of the optimality conditions allows the application of well known duality based decomposition method to split the original problem into a collection of subproblems on a per agent basis that are tied together by coordination variables. While this development is based on the Lagrangian formulation of the decomposable OCPs, additionally the Augmented Lagrangian formulation of the decomposable OCPs is stated. The equivalence of the optimal solution following from the Lagrangian formulation and the augmented Lagrangian formulation is established for the given decomposable OCPs to form the basis for the application of distributed algorithms. Building on the properties of the decomposable OCP, duality based algorithms can be applied to find the optimal solution. To this end, a Dual Decomposition based method, and three variants of an augmented Lagrangian based method are applied. The algorithms are compared by the application to a toy problem, featuring two coupled water tanks. For the best performing method, i.e. Alternating Direction Method of Multipliers ADMM a convergence prove for the application to the developed OCP is provided. The chosen decomposition of a given distributed dynamical system, can have a large impact on the performance of ADMM. For two of the developed formulations of the distributed dynamics, it is possible to choose a decomposition that allows each agent to anticipate the reaction of its coupled neighbors to its own actions. The effectiveness of the decomposition scheme is demonstrated comparing it with a standard decomposition scheme when both are applied to a cooperative payload example. In this example system, a four robots are coupled to to payloads and need to collectively carry them to a target location. It is shown that the convergence of ADMM with this scheme can be greatly enhanced. To highlight challenges of a practical DMPC implementation, a distributed software framework for the agent implementation is developed using the unified modeling language (UML). Using UML the data exchange and configuration of a coupling connection between the agents is modeled. Furthermore, the calculation of basic functions to be used by the optimizing framework is modeled in a modular way, allowing to assemble complex dynamics from modular building blocks based on the current couplings of the agent. The developed framework is then used in an laboratory setup featuring four coupled water tanks. Each tank is equipped with its own computing hardware and connected to a common information exchange bus. The experimental results show the DMPC to control different coupling scenarios of the setup by employing the agent framework. Yet, the performance analysis reveals the communication to take up a large portion of the runtime.