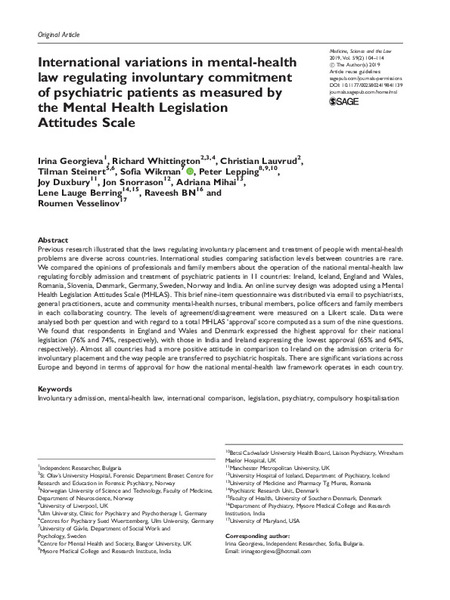 Previous research illustrated that the laws regulating involuntary placement and treatment of people with mental-health problems are diverse across countries. International studies comparing satisfaction levels between countries are rare. We compared the opinions of professionals and family members about the operation of the national mental-health law regulating forcibly admission and treatment of psychiatric patients in 11 countries: Ireland, Iceland, England and Wales, Romania, Slovenia, Denmark, Germany, Sweden, Norway and India. An online survey design was adopted using a Mental Health Legislation Attitudes Scale (MHLAS). This brief nine-item questionnaire was distributed via email to psychiatrists, general practitioners, acute and community mental-health nurses, tribunal members, police officers and family members in each collaborating country. The levels of agreement/disagreement were measured on a Likert scale. Data were analysed both per question and with regard to a total MHLAS ‘approval’ score computed as a sum of the nine questions. We found that respondents in England and Wales and Denmark expressed the highest approval for their national legislation (76% and 74%, respectively), with those in India and Ireland expressing the lowest approval (65% and 64%, respectively). Almost all countries had a more positive attitude in comparison to Ireland on the admission criteria for involuntary placement and the way people are transferred to psychiatric hospitals. There are significant variations across Europe and beyond in terms of approval for how the national mental-health law framework operates in each country. © In Copyright http://rightsstatements.org/vocab/InC/1.0/