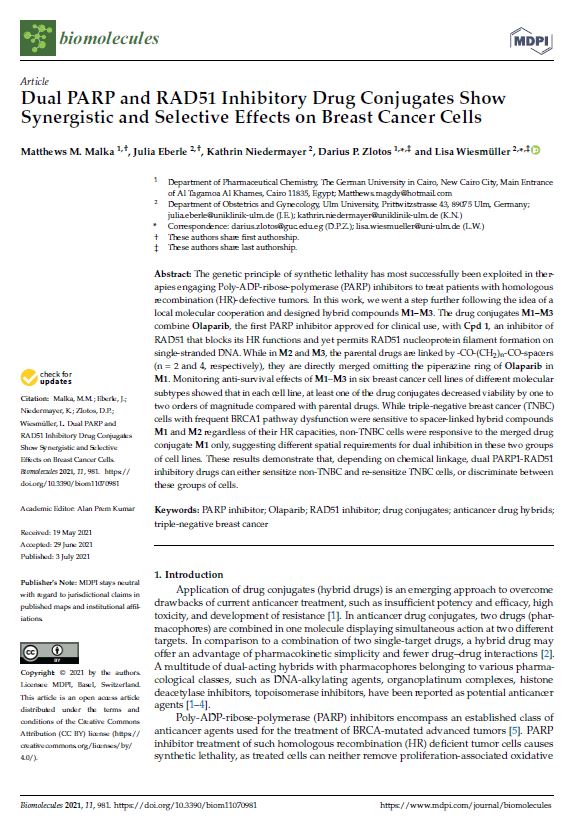 The genetic principle of synthetic lethality has most successfully been exploited in therapies engaging Poly-ADP-ribose-polymerase (PARP) inhibitors to treat patients with homologous recombination (HR)-defective tumors. In this work, we went a step further following the idea of a local molecular cooperation and designed hybrid compounds M1–M3. The drug conjugates M1–M3 combine Olaparib, the first PARP inhibitor approved for clinical use, with Cpd 1, an inhibitor of RAD51 that blocks its HR functions and yet permits RAD51 nucleoprotein filament formation on single-stranded DNA. While in M2 and M3, the parental drugs are linked by -CO-(CH2)n-CO-spacers (n = 2 and 4, respectively), they are directly merged omitting the piperazine ring of Olaparib in M1. Monitoring anti-survival effects of M1–M3 in six breast cancer cell lines of different molecular subtypes showed that in each cell line, at least one of the drug conjugates decreased viability by one to two orders of magnitude compared with parental drugs. While triple-negative breast cancer (TNBC) cells with frequent BRCA1 pathway dysfunction were sensitive to spacer-linked hybrid compounds M1 and M2 regardless of their HR capacities, non-TNBC cells were responsive to the merged drug conjugate M1 only, suggesting different spatial requirements for dual inhibition in these two groups of cell lines. These results demonstrate that, depending on chemical linkage, dual PARP1-RAD51 inhibitory drugs can either sensitize non-TNBC and re-sensitize TNBC cells, or discriminate between these groups of cells.