Stagnant loop syndrome: a rare cause of severe malabsorption 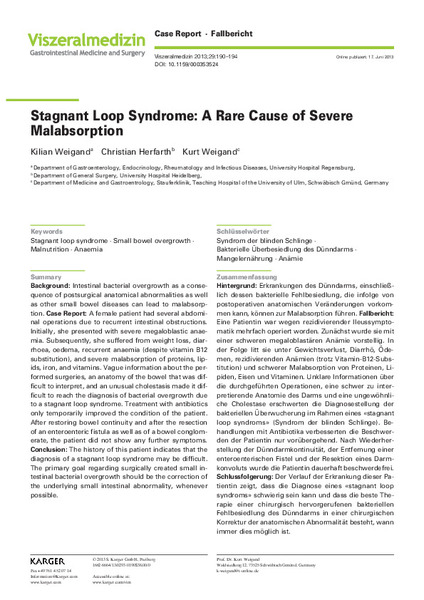 Background: Intestinal bacterial overgrowth as a consequence of postsurgical anatomical abnormalities as well as other small bowel diseases can lead to malabsorption. Case Report: A female patient had several abdominal operations due to recurrent intestinal obstructions. Initially, she presented with severe megaloblastic anaemia. Subsequently, she suffered from weight loss, diarrhoea, oedema, recurrent anaemia (despite vitamin B12 substitution), and severe malabsorption of proteins, lipids, iron, and vitamins. Vague information about the performed surgeries, an anatomy of the bowel that was difficult to interpret, and an unusual cholestasis made it difficult to reach the diagnosis of bacterial overgrowth due to a stagnant loop syndrome. Treatment with antibiotics only temporarily improved the condition of the patient. After restoring bowel continuity and after the resection of an enteroenteric fistula as well as of a bowel conglomerate, the patient did not show any further symptoms. Conclusion: The history of this patient indicates that the diagnosis of a stagnant loop syndrome may be difficult. The primary goal regarding surgically created small intestinal bacterial overgrowth should be the correction of the underlying small intestinal abnormality, whenever possible. © In Copyright http://rightsstatements.org/vocab/InC/1.0/