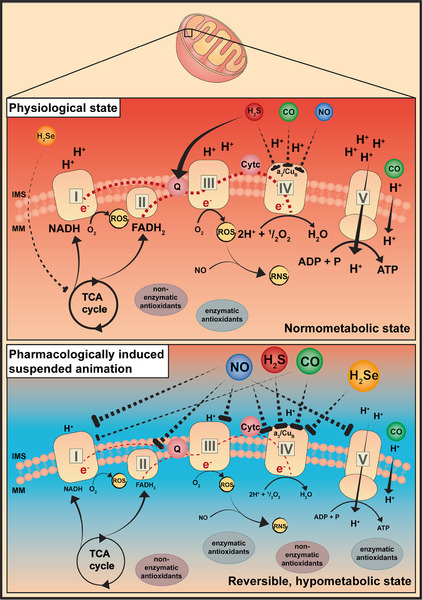 The role of nitric oxide (NO), carbon monoxide (CO), and hydrogen sulfide (H2S) as poisonous gases is well-established. However, they are not only endogenously produced but also, at low concentrations, exert beneficial effects, such as anti-inflammation, and cytoprotection. This knowledge initiated the ongoing debate, as to whether these molecules, also referred to as “gaseous mediators” or “gasotransmitters,” could serve as novel therapeutic agents. In this context, it is noteworthy, that all gasotransmitters specifically target the mitochondria, and that this interaction may modulate mitochondrial bioenergetics, thereby subsequently affecting metabolic function. This feature is of crucial interest for the possible induction of “suspended animation.” Suspended animation, similar to mammalian hibernation (and/or estivation), refers to an externally induced hypometabolic state, with the intention to preserve organ function in order to survive otherwise life-threatening conditions. This hypometabolic state is usually linked to therapeutic hypothermia, which, however, comes along with adverse effects (e.g., coagulopathy, impaired host defense). Therefore, inducing an on-demand hypometabolic state by directly lowering the energy metabolism would be an attractive alternative. Theoretically, gasotransmitters should reversibly interact and inhibit the mitochondrial respiratory chain during pharmacologically induced suspended animation. However, it has to be kept in mind that this effect also bears the risk of cytotoxicity resulting from the blockade of the mitochondrial respiratory chain. Therefore, this review summarizes the current knowledge of the impact of gasotransmitters on modulating mitochondrial function. Further, we will discuss their role as potential candidates in inducing a suspended animation.