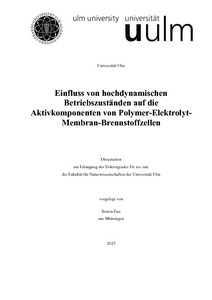 The objective of the present work is to investigate the influence of the dynamic operating conditions regarding their impact on the PEMFC degradation, mainly the electrode. The formation of local starvation regions within the PEMFC are investigated by dynamic CFD simulations and a derivated analytical formula. In case of a reactant undersupply, the first local starvation region near the outlets has been formed within 20-40 ms after the investigated load change from 0.2 to 1.0 A cm-2. The velocity of the starvation propagation in case of an ongoing insufficient reactant supply depends on the reactant storage capability and can be reduced with a higher operating pressure and the usage of pure hydrogen as anodic fuel. As a consequence of the local starvation regions, a heterogeneous current and temperature distribution have been proven inside the PEMFC reinforcing the PEMFC degradation mechanisms inside the PEMFC compared to the optimal dynamic operation without starvation conditions. The consequences of local starvation issues on the PEMFC degradation have been investigated within the dynamic experiments carried out. An exponential increase of the anodic as well as the cathodic carbon corrosion rates have been mainly detected in the case of local fuel starvation conditions. A significant reduction of the PEMFC performance has been proven as a result of these critical operating states during the dynamic PEMFC operation. The reduced PEMFC performance can be traced to the loss of electrochemical active surface area of the electrodes and an increased cell and mass transport resistance. The significant influence of an insufficient gas supply during dynamic PEMFC operation has been shown in the simulations and experiments carried out. Thus, an adequate control strategy is needed for the dynamic PEMFC operation in order to avoid the investigated critical operating conditions and to ensure the specified durability targets of automotive PEMFC applications.