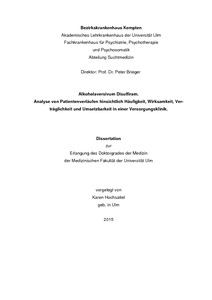 Aim. Disulfiram, an alcohol deterrent drug, plays a minor role in the treatment of alcohol dependency in Germany. This study takes a closer look at the efficacy, tolerability and the handling of Disulfiram in an outpatient treatment program put into practice in an German psychiatric hospital. Method. Data of 190 alcohol dependent patients who had participated in a Disulfiram therapy program were analyzed with respect to efficacy and tolerability. To test for predictors of a positive therapy outcome, a logistic regression was carried out. Results. 46 Patients had maintained alcohol abstinence for one year - which was defined as a positive outcome - while 99 patients had had an alcohol relapse despite being in the program. Severe complications didn"t occur. Therapy success was related to regular participation in a treatment-specific group therapy. Conclusion. Disulfiram proved to be an efficiant, well-tolerated medication which could easily be integrated in the routine of a psychiatric hospital. Group therapy seemed to influence the outcome in a positive way. With regard to these results, a wider distribution of Disulfiram in a multimodal setting should be pursued.