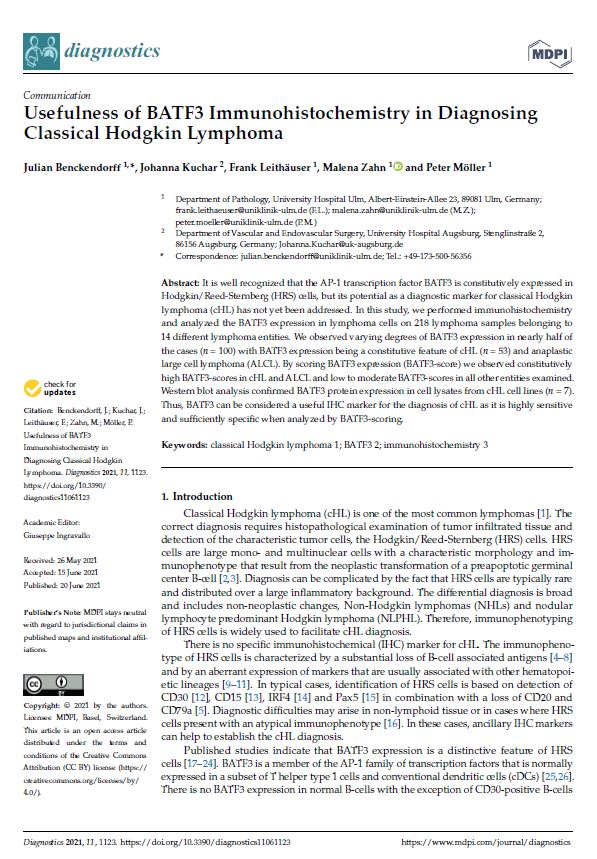 It is well recognized that the AP-1 transcription factor BATF3 is constitutively expressed in Hodgkin/Reed-Sternberg (HRS) cells, but its potential as a diagnostic marker for classical Hodgkin lymphoma (cHL) has not yet been addressed. In this study, we performed immunohistochemistry and analyzed the BATF3 expression in lymphoma cells on 218 lymphoma samples belonging to 14 different lymphoma entities. We observed varying degrees of BATF3 expression in nearly half of the cases (n = 100) with BATF3 expression being a constitutive feature of cHL (n = 53) and anaplastic large cell lymphoma (ALCL). By scoring BATF3 expression (BATF3-score) we observed constitutively high BATF3-scores in cHL and ALCL and low to moderate BATF3-scores in all other entities examined. Western blot analysis confirmed BATF3 protein expression in cell lysates from cHL cell lines (n = 7). Thus, BATF3 can be considered a useful IHC marker for the diagnosis of cHL as it is highly sensitive and sufficiently specific when analyzed by BATF3-scoring.