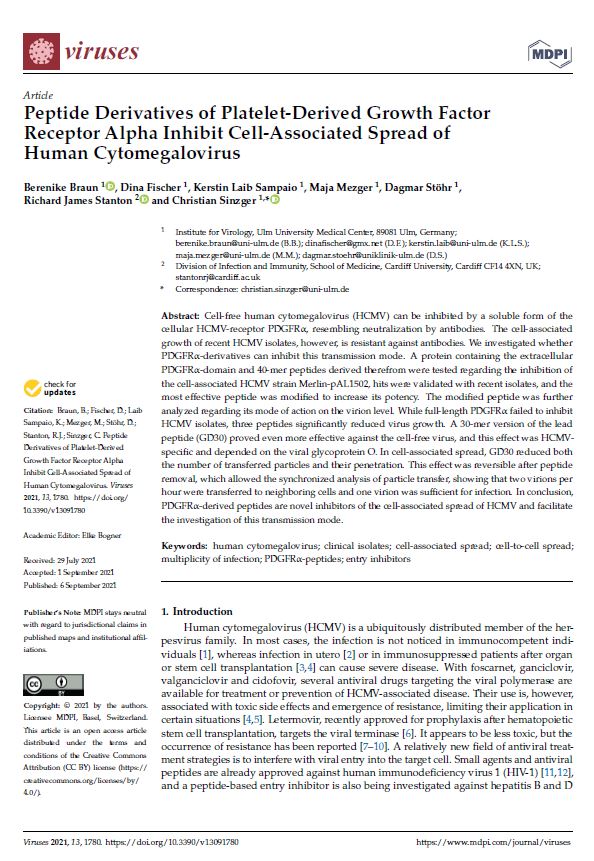 Cell-free human cytomegalovirus (HCMV) can be inhibited by a soluble form of the cellular HCMV-receptor PDGFRα, resembling neutralization by antibodies. The cell-associated growth of recent HCMV isolates, however, is resistant against antibodies. We investigated whether PDGFRα-derivatives can inhibit this transmission mode. A protein containing the extracellular PDGFRα-domain and 40-mer peptides derived therefrom were tested regarding the inhibition of the cell-associated HCMV strain Merlin-pAL1502, hits were validated with recent isolates, and the most effective peptide was modified to increase its potency. The modified peptide was further analyzed regarding its mode of action on the virion level. While full-length PDGFRα failed to inhibit HCMV isolates, three peptides significantly reduced virus growth. A 30-mer version of the lead peptide (GD30) proved even more effective against the cell-free virus, and this effect was HCMV-specific and depended on the viral glycoprotein O. In cell-associated spread, GD30 reduced both the number of transferred particles and their penetration. This effect was reversible after peptide removal, which allowed the synchronized analysis of particle transfer, showing that two virions per hour were transferred to neighboring cells and one virion was sufficient for infection. In conclusion, PDGFRα-derived peptides are novel inhibitors of the cell-associated spread of HCMV and facilitate the investigation of this transmission mode.