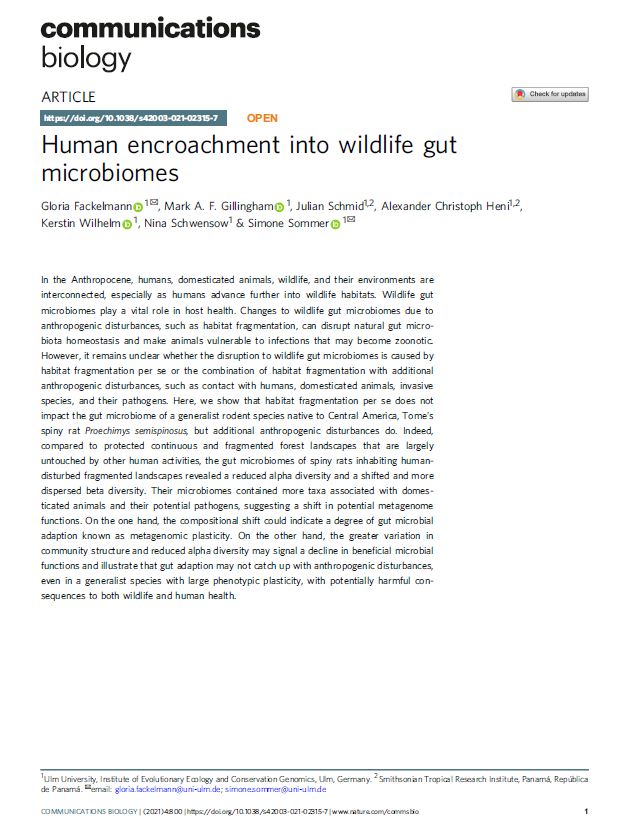 In the Anthropocene, humans, domesticated animals, wildlife, and their environments are interconnected, especially as humans advance further into wildlife habitats. Wildlife gut microbiomes play a vital role in host health. Changes to wildlife gut microbiomes due to anthropogenic disturbances, such as habitat fragmentation, can disrupt natural gut microbiota homeostasis and make animals vulnerable to infections that may become zoonotic. However, it remains unclear whether the disruption to wildlife gut microbiomes is caused by habitat fragmentation per se or the combination of habitat fragmentation with additional anthropogenic disturbances, such as contact with humans, domesticated animals, invasive species, and their pathogens. Here, we show that habitat fragmentation per se does not impact the gut microbiome of a generalist rodent species native to Central America, Tome’s spiny rat Proechimys semispinosus, but additional anthropogenic disturbances do. Indeed, compared to protected continuous and fragmented forest landscapes that are largely untouched by other human activities, the gut microbiomes of spiny rats inhabiting human-disturbed fragmented landscapes revealed a reduced alpha diversity and a shifted and more dispersed beta diversity. Their microbiomes contained more taxa associated with domesticated animals and their potential pathogens, suggesting a shift in potential metagenome functions. On the one hand, the compositional shift could indicate a degree of gut microbial adaption known as metagenomic plasticity. On the other hand, the greater variation in community structure and reduced alpha diversity may signal a decline in beneficial microbial functions and illustrate that gut adaption may not catch up with anthropogenic disturbances, even in a generalist species with large phenotypic plasticity, with potentially harmful consequences to both wildlife and human health.