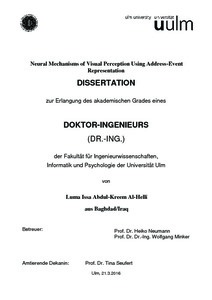 The visual cortex analyzes motion information along a hierarchical architecture composed of several visual areas. These areas interact through bidirectional interconnections in which bottom-up connections pass on the driving visual input from lower areas to higher areas, while top-down connections re-enter higher level representations to the earlier areas via feedback. This thesis proposes a bio-inspired visual model for motion detection and integration in which feedforward and feedback interactions are incorporated. Our model takes into account two main areas in the visual cortex along motion pathway, V1 and MT, with different feature selectivities, V1 (direction selectivity) and MT (velocity selectivity). The model highlights how the visual cortical areas interact and communicate with each other based on the different representations involved. A neuromorphic vision sensor (silicon retina) is exploited where the input is generated by an event sensor that is sensitive to temporal changes in the input luminance. The neuromorphic vision sensor simulates the spike-generation functionality of the biological retina which is unlike a frame-based sensor that generates fully integrated luminance functions. This thesis shows how the functionality of Adelson-Bergen spatiotemporal filtering is adapted to be consistent with the bio-mimetic architecture of the silicon retina.