The Roles of Primary Emotional Systems and Need Satisfaction in Problematic Internet and Smartphone Use: A Network Perspective 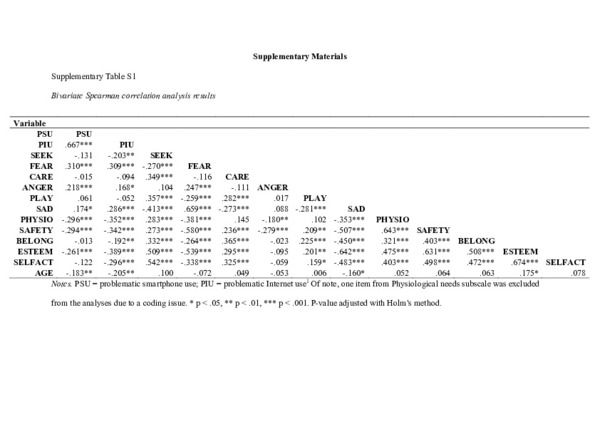 Problematic Internet and smartphone use (PIU and PSU, respectively) have received significant attention over the past years. In the current work, we studied the associations between PIU and PSU, primary emotional systems, and need satisfaction. The effective sample comprised 399 people who responded to scales measuring these variables. Bivariate correlation analysis showed that both PSU and PIU were positively associated with negative primary emotion traits (FEAR, ANGER, SADNESS) as well as lower scores on most of the need satisfaction factors. Network analysis showed that while PIU and PSU have a strong association with each other, in general, there were not many significant correlations between PSU, PIU, and other variables in the network. The associations being present were rather weak. Network analysis showed that PSU was positively associated with FEAR, ANGER, PLAY primary emotional systems. Both PSU and PIU had a negative association with safety and security and physiological needs satisfaction. Moreover, PSU had a positive link with belongingness need satisfaction, while higher PIU was associated with lower esteem and self-actualization need satisfaction. Addressing those unmet needs may be helpful in reducing problematic technology use, but further research testing this would be necessary.