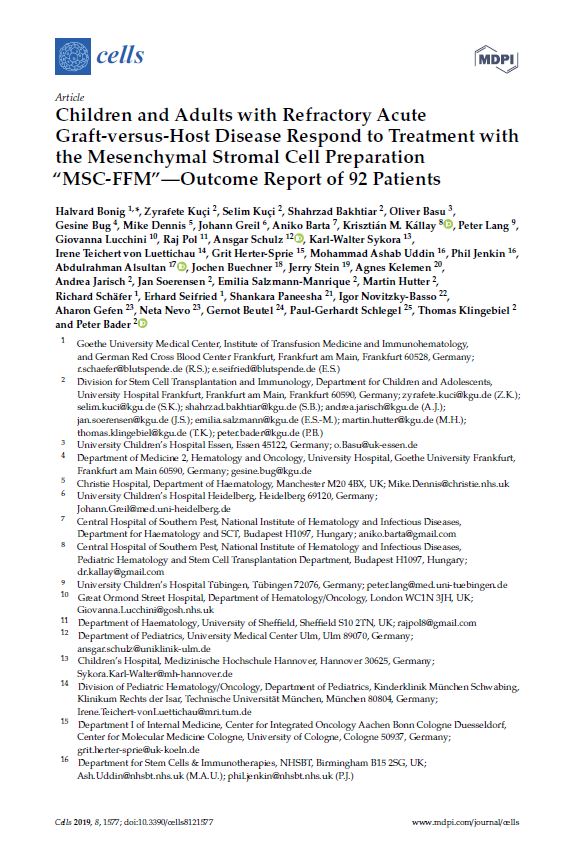 (1) Background: Refractory acute graft-versus-host disease (R-aGvHD) remains a leading cause of death after allogeneic stem cell transplantation. Survival rates of 15% after four years are currently achieved; deaths are only in part due to aGvHD itself, but mostly due to adverse effects of R-aGvHD treatment with immunosuppressive agents as these predispose patients to opportunistic infections and loss of graft-versus-leukemia surveillance resulting in relapse. Mesenchymal stromal cells (MSC) from different tissues and those generated by various protocols have been proposed as a remedy for R-aGvHD but the enthusiasm raised by initial reports has not been ubiquitously reproduced. (2) Methods: We previously reported on a unique MSC product, which was generated from pooled bone marrow mononuclear cells of multiple third-party donors. The products showed dose-to-dose equipotency and greater immunosuppressive capacity than individually expanded MSCs from the same donors. This product, MSC-FFM, has entered clinical routine in Germany where it is licensed with a national hospital exemption authorization. We previously reported satisfying initial clinical outcomes, which we are now updating. The data were collected in our post-approval pharmacovigilance program, i.e., this is not a clinical study and the data is high-level and non-monitored. (3) Results: Follow-up for 92 recipients of MSC-FFM was reported, 88 with GvHD ≥°III, one-third only steroid-refractory and two-thirds therapy resistant (refractory to steroids plus ≥2 additional lines of treatment). A median of three doses of MSC-FFM was administered without apparent toxicity. Overall response rates were 82% and 81% at the first and last evaluation, respectively. At six months, the estimated overall survival was 64%, while the cumulative incidence of death from underlying disease was 3%. (4) Conclusions: MSC-FFM promises to be a safe and efficient treatment for severe R-aGvHD.