Properties of Li2FeSiO4 and other electrode materials of batteries: A theoretical study based on atomistic modelling using DFT 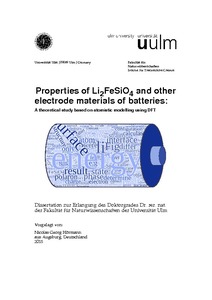 Two electrode materials of Li ion batteries - Li2FeSiO4 (Part I) and Sn (Part II) - are studied in this thesis, based on ab-initio calculations. First, bulk properties of LixFeSiO4 (LFS) are determined, confirming that it reacts via phase separation. Polaron properties are studied in detail as well as a model Landau free energy which is related to the cycling behavior. Subsequently, coherent nucleation in bulk and at surfaces is studied as an alternative pathway including the effect of interfaces and strain. Furthermore, detailed surface studies also allow to understand experimental particle shapes and provide insights in the change of surface compositions during cycling. In part II, properties of Sn nanoparticles and other materials are discussed. Three phases of Sn, namely the ambient pressure phases a-, b- and g-Sn, are considered. By analyzing surface energies and combining these with the temperature dependence of the vibrational degrees of freedom, the temperature-size phase diagram is constructed. The computations indicate that the semi-metallic a-Sn phase is becoming increasingly unstable for smaller particles due to relatively high surface energies. On the other hand, g-Sn is increasingly stabilized, which is proved by explicit structural optimizations of 3.5 nm thick Sn nanowires. Finally, a screening of Fluoride battery materials is performed, based on experimental and theoretical data, by data-base analysis and own computations.