The 2D:4D-Ratio and neuroticism revisited: empirical evidence from Germany and China 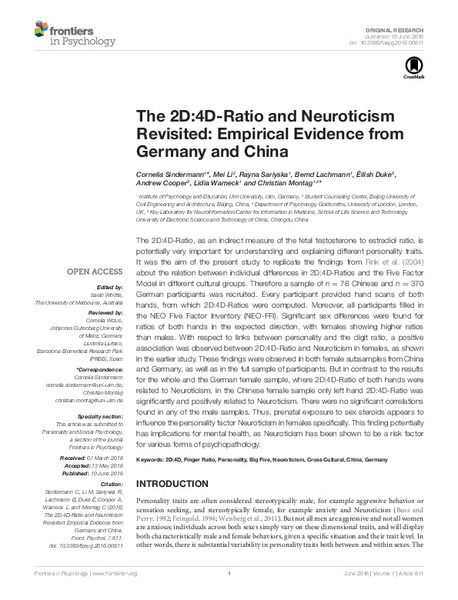 The 2D:4D-Ratio, as an indirect measure of the fetal testosterone to estradiol ratio, is potentially very important for understanding and explaining different personality traits. It was the aim of the present study to replicate the findings from Fink et al. (2004) about the relation between individual differences in 2D:4D-Ratios and the Five Factor Model in different cultural groups. Therefore a sample of n = 78 Chinese and n = 370 German participants was recruited. Every participant provided hand scans of both hands, from which 2D:4D-Ratios were computed. Moreover, all participants filled in the NEO Five Factor Inventory (NEO-FFI). Significant sex differences were found for ratios of both hands in the expected direction, with females showing higher ratios than males. With respect to links between personality and the digit ratio, a positive association was observed between 2D:4D-Ratio and Neuroticism in females, as shown in the earlier study. These findings were observed in both female subsamples from China and Germany, as well as in the full sample of participants. But in contrast to the results for the whole and the German female sample, where 2D:4D-Ratio of both hands were related to Neuroticism, in the Chinese female sample only left hand 2D:4D-Ratio was significantly and positively related to Neuroticism. There were no significant correlations found in any of the male samples. Thus, prenatal exposure to sex steroids appears to influence the personality factor Neuroticism in females specifically. This finding potentially has implications for mental health, as Neuroticism has been shown to be a risk factor for various forms of psychopathology.