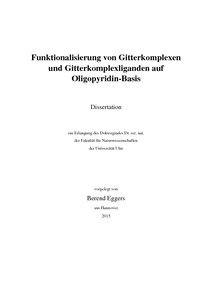 The following thesis deals with the functionalization of bisterpyridine and terpyridine ligands, as well as their metal complexes to enable their use as novel platforms for the creation of three dimensional multivalent grid complex structures through supramolecular self organization. For this purpose a number of functionalized chalcones were synthesized and converted into the corresponding functionalized bisterpyridine or terpyridine ligands under either known or newly developed reaction conditions. A functional group interconversion approach enabled the introduction of several functional groups that were not available through the original synthesis. To allow for the attachment of complex molecules, a number of syntheses based on the CuAAC reaction were developed through which dyes, biomolecules and spacers could be attached to the ligand structure. In addition it was possible through a thermal Huisgen reaction to functionalize the finished metal complex and attach up to eight substituents in one step. Finally the synthesis of a terpyridine-bound tripeptide was successful, which forms fibrillar aggregates in an aqueous environment.