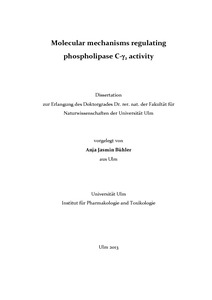 The inositol-phospholipid-specific phospholipase C-gamma2 (PLC-gamma2) produces the second messengers diacyglycerol (DAG) and inositol 1,4,5-triphosphate (IP3) by catalysing the hydrolysis of the membrane phospholipid phosphatidylinositol 4,5-bisphosphate (PIP2). IP3 triggers the release of Ca2+ from the endoplasmatic reticulum, representing a crucial event in cellular activation. The activity of the PLC-gamma isozymes is regulated by several inter- and intramolecular mechanisms, constituting a complex regulatory network. Deregulated PLC-gamma activity is associated with several severe immunological phenotypes in mice and in human, which demonstrates the necessity to understand the regulation of these important signalling molecules. Quite recently, deletions of exon 19 and exon 20-22 in the PLCG2 gene were shown to cause a novel disease pattern, designated PLAID (phospholipase C-gamma2-associated antibody deficiency and immune dysregulation) and characterized by immunodeficiency, autoimmunity and cold urticaria. In this work it was demonstrated that the two PLC-gamma2 deletion mutants, PLC-gamma2 Delta19 and PLC-gamma2 Delta20-22, which were shown to be associated with PLAID, are specifically activated by cool temperatures. This was investigated by incubation of transfected COS-7 cells at different temperatures and the subsequently measurement of inositol phosphate formation. The activation of the PLAID mutants by cool temperatures has been shown to be a reversible process that competes with the Rac2-mediated activation of the lipase. Furthermore, the mechanism underlying the described sensitivity of the mutants to cool temperatures has been shown to be dependent on the integrity of the spPH domain which is distinct from the mechanism by which autoinhibition of PLC-gamma2 is regulated.