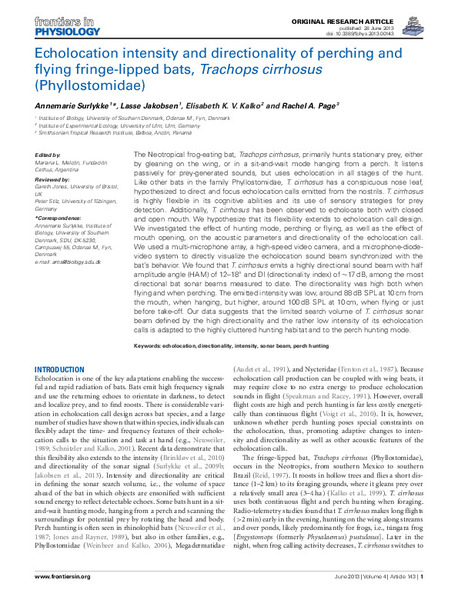 The Neotropical frog-eating bat, Trachops cirrhosus, primarily hunts stationary prey, either by gleaning on the wing, or in a sit-and-wait mode hanging from a perch. It listens passively for prey-generated sounds, but uses echolocation in all stages of the hunt. Like other bats in the family Phyllostomidae, T. cirrhosus has a conspicuous nose leaf, hypothesized to direct and focus echolocation calls emitted from the nostrils. T. cirrhosus is highly flexible in its cognitive abilities and its use of sensory strategies for prey detection. Additionally, T. cirrhosus has been observed to echolocate both with closed and open mouth. We hypothesize that its flexibility extends to echolocation call design. We investigated the effect of hunting mode, perching or flying, as well as the effect of mouth opening, on the acoustic parameters and directionality of the echolocation call. We used a multi-microphone array, a high-speed video camera, and a microphone-diode-video system to directly visualize the echolocation sound beam synchronized with the bat's behavior. We found that T. cirrhosus emits a highly directional sound beam with half amplitude angle (HAM) of 12–18° and DI (directionality index) of ~17 dB, among the most directional bat sonar beams measured to date. The directionality was high both when flying and when perching. The emitted intensity was low, around 88 dB SPL at 10 cm from the mouth, when hanging, but higher, around 100 dB SPL at 10 cm, when flying or just before take-off. Our data suggests that the limited search volume of T. cirrhosus sonar beam defined by the high directionality and the rather low intensity of its echolocation calls is adapted to the highly cluttered hunting habitat and to the perch hunting mode.