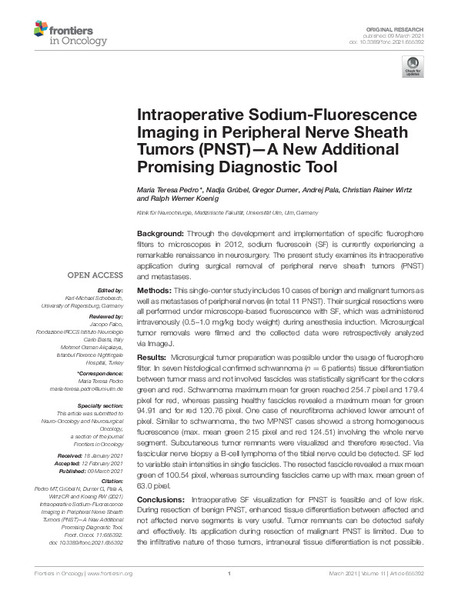 Background: Through the development and implementation of specific fluorophore filters to microscopes in 2012, sodium fluorescein (SF) is currently experiencing a remarkable renaissance in neurosurgery. The present study examines its intraoperative application during surgical removal of peripheral nerve sheath tumors (PNST) and metastases. Methods: This single-center study includes 10 cases of benign and malignant tumors as well as metastases of peripheral nerves (in total 11 PNST). Their surgical resections were all performed under microscope-based fluorescence with SF, which was administered intravenously (0.5–1.0 mg/kg body weight) during anesthesia induction. Microsurgical tumor removals were filmed and the collected data were retrospectively analyzed via ImageJ. Results: Microsurgical tumor preparation was possible under the usage of fluorophore filter. In seven histological confirmed schwannoma (n = 6 patients) tissue differentiation between tumor mass and not involved fascicles was statistically significant for the colors green and red. Schwannoma maximum mean for green reached 254.7 pixel and 179.4 pixel for red, whereas passing healthy fascicles revealed a maximum mean for green 94.91 and for red 120.76 pixel. One case of neurofibroma achieved lower amount of pixel. Similar to schwannoma, the two MPNST cases showed a strong homogeneous fluorescence (max. mean green 215 pixel and red 124.51) involving the whole nerve segment. Subcutaneous tumor remnants were visualized and therefore resected. Via fascicular nerve biopsy a B-cell lymphoma of the tibial nerve could be detected. SF led to variable stain intensities in single fascicles. The resected fascicle revealed a max mean green of 100.54 pixel, whereas surrounding fascicles came up with max. mean green of 63.0 pixel. Conclusions: Intraoperative SF visualization for PNST is feasible and of low risk. During resection of benign PNST, enhanced tissue differentiation between affected and not affected nerve segments is very useful. Tumor remnants can be detected safely and effectively. Its application during resection of malignant PNST is limited. Due to the infiltrative nature of those tumors, intraneural tissue differentiation is not possible. “Fluorescence-guided” biopsy can be regarded as an additional advantage in PNST surgery. Due to the encouraging experience in our institution SF was established as standard visualization tool in PNST surgery.