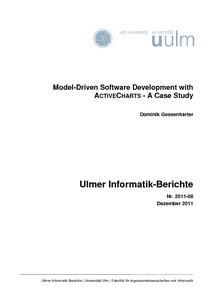 Modeling static structure by using UML class diagrams is well supported by many tools and a de facto standard in modern software development. But generating code is still in a rudimentary stage. Many tools comprise extensible code generators, but the initial implementations of tool vendors are on a very low level. Although the claim that code generation is beneficial with respect to e. g. code quality and development time is generally accepted, state-of-the-art tool support is still far away from the possible. But what is possible? To answer this question, we conducted a case study using a highly sophisticated code generator for the development of a sample project. With regard to the project’s static structure and its features it is a small project. However, with respect to the applied modeling concepts it is a very complex system. Thus, we achieve to outline benefits of code generation for highly abstract modeling concepts in the context of an easily manageable project. This report is geared toward an audience with advanced knowledge of UML modeling concepts and their semantics. It focuses neither on technical aspects of how to generate code nor on details of the generated code itself, rather than on the benefit of usably supporting modeling and code generation by development tools.