The dynamic nature of CO adlayers on Pt(111) electrodes 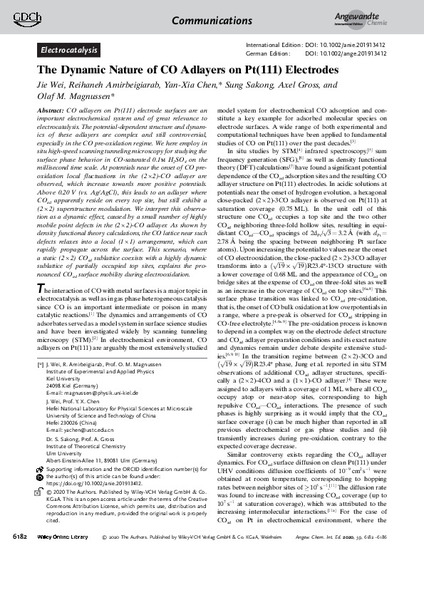 CO adlayers on Pt(111) electrode surfaces are an important electrochemical system and of great relevance to electrocatalysis. The potential-dependent structure and dynamics of these adlayers are complex and still controversial, especially in the CO pre-oxidation regime. We here employ in situ high-speed scanning tunneling microscopy for studying the surface phase behavior in CO-saturated 0.1 m H2SO4 on the millisecond time scale. At potentials near the onset of CO pre-oxidation local fluctuations in the (2×2)-CO adlayer are observed, which increase towards more positive potentials. Above 0.20 V (vs. Ag/AgCl), this leads to an adlayer where COad apparently reside on every top site, but still exhibit a (2×2) superstructure modulation. We interpret this observation as a dynamic effect, caused by a small number of highly mobile point defects in the (2×2)-CO adlayer. As shown by density functional theory calculations, the CO lattice near such defects relaxes into a local (1×1) arrangement, which can rapidly propagate across the surface. This scenario, where a static (2×2) COad sublattice coexists with a highly dynamic sublattice of partially occupied top sites, explains the pronounced COad surface mobility during electrooxidation.