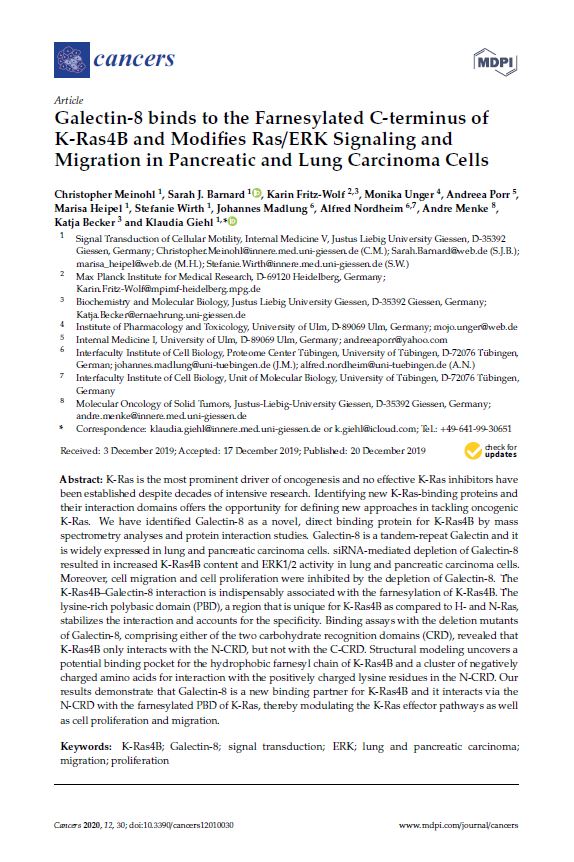 K-Ras is the most prominent driver of oncogenesis and no effective K-Ras inhibitors have been established despite decades of intensive research. Identifying new K-Ras-binding proteins and their interaction domains offers the opportunity for defining new approaches in tackling oncogenic K-Ras. We have identified Galectin-8 as a novel, direct binding protein for K-Ras4B by mass spectrometry analyses and protein interaction studies. Galectin-8 is a tandem-repeat Galectin and it is widely expressed in lung and pancreatic carcinoma cells. siRNA-mediated depletion of Galectin-8 resulted in increased K-Ras4B content and ERK1/2 activity in lung and pancreatic carcinoma cells. Moreover, cell migration and cell proliferation were inhibited by the depletion of Galectin-8. The K-Ras4B–Galectin-8 interaction is indispensably associated with the farnesylation of K-Ras4B. The lysine-rich polybasic domain (PBD), a region that is unique for K-Ras4B as compared to H- and N-Ras, stabilizes the interaction and accounts for the specificity. Binding assays with the deletion mutants of Galectin-8, comprising either of the two carbohydrate recognition domains (CRD), revealed that K-Ras4B only interacts with the N-CRD, but not with the C-CRD. Structural modeling uncovers a potential binding pocket for the hydrophobic farnesyl chain of K-Ras4B and a cluster of negatively charged amino acids for interaction with the positively charged lysine residues in the N-CRD. Our results demonstrate that Galectin-8 is a new binding partner for K-Ras4B and it interacts via the N-CRD with the farnesylated PBD of K-Ras, thereby modulating the K-Ras effector pathways as well as cell proliferation and migration.