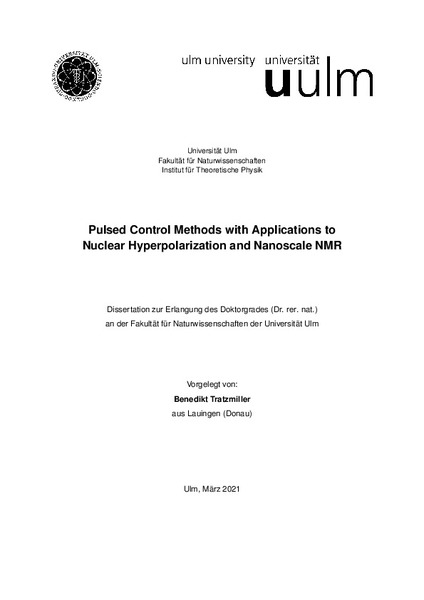 Nuclear magnetic resonance (NMR) is an established method for non-invasive and non-destructive imaging and spectroscopy. The nitrogen vacancy (NV) center in diamond has emerged as a promising sensor for NMR signals at the nanoscale due to the possibility to initialize and manipulate its spin at room temperature combined with the electron spin properties that allow to measure different signals. This thesis presents improvements for two main aspects of NV-NMR, advanced NV-hyperpolarization techniques that allow to improve the signal-to-noise ratio of NMR applications, and improved NV-sensing protocols. The work on hyperpolarization techniques includes various improvements, adaptations, and applications of the PulsePol sequence. Modifications and alternative sequence designs that overcome different experimental challenges are shown, including designs that allow to generate nuclear-nuclear gates, designs without neighbouring pulses, an adaptation for usage in cavities and a pulse design that is more robust to NV-NV interactions. We investigate the behaviour under various conditions analytically and numerically. We further show that pulsed polarization sequences can be applied to other systems than NV-centers, for example to Parahydrogen-induced polarization. The second part on improved NV-sensing protocols presents and investigates extensions of recently developed heterodyning schemes. We show that an array of nuclear spins can be used to transform the problem of measuring a constant magnetic field to measuring the frequency of an oscillation with the NV center and compare this protocol to other methods. We further adapt heterodyning protocols such that they are sensitive to frequency differences by analyzing the effect of the pulse phases on the readout probability and discuss under which conditions this allows to overcome magnetic field fluctuations that would render conventional NMR signals unusable. In summary, this work investigates two essential aspects of NV-NMR. We present and improve pulsed polarization protocols as a robust and efficient tool to achieve nuclear hyperpolarization and develop tools for the ideal detection of the NMR signal from nuclear spins with the NV center.