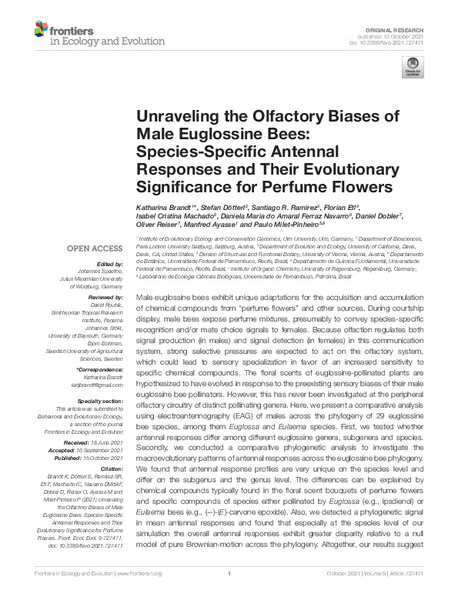 Male euglossine bees exhibit unique adaptations for the acquisition and accumulation of chemical compounds from “perfume flowers” and other sources. During courtship display, male bees expose perfume mixtures, presumably to convey species-specific recognition and/or mate choice signals to females. Because olfaction regulates both signal production (in males) and signal detection (in females) in this communication system, strong selective pressures are expected to act on the olfactory system, which could lead to sensory specialization in favor of an increased sensitivity to specific chemical compounds. The floral scents of euglossine-pollinated plants are hypothesized to have evolved in response to the preexisting sensory biases of their male euglossine bee pollinators. However, this has never been investigated at the peripheral olfactory circuitry of distinct pollinating genera. Here, we present a comparative analysis using electroantennography (EAG) of males across the phylogeny of 29 euglossine bee species, among them Euglossa and Eulaema species. First, we tested whether antennal responses differ among different euglossine genera, subgenera and species. Secondly, we conducted a comparative phylogenetic analysis to investigate the macroevolutionary patterns of antennal responses across the euglossine bee phylogeny. We found that antennal response profiles are very unique on the species level and differ on the subgenus and the genus level. The differences can be explained by chemical compounds typically found in the floral scent bouquets of perfume flowers and specific compounds of species either pollinated by Euglossa (e.g., ipsdienol) or Eulaema bees (e.g., (−)-(E)-carvone epoxide). Also, we detected a phylogenetic signal in mean antennal responses and found that especially at the species level of our simulation the overall antennal responses exhibit greater disparity relative to a null model of pure Brownian-motion across the phylogeny. Altogether, our results suggest that (1) euglossine bee species exhibit species-specific antennal responses that differ among euglossine genera and subgenera, (2) antennal responses diverge early after speciation events, and (3) scent composition of perfume flowers evolved in response to pollinator-mediated selection imposed by preexisting sensory biases in euglossine bees.