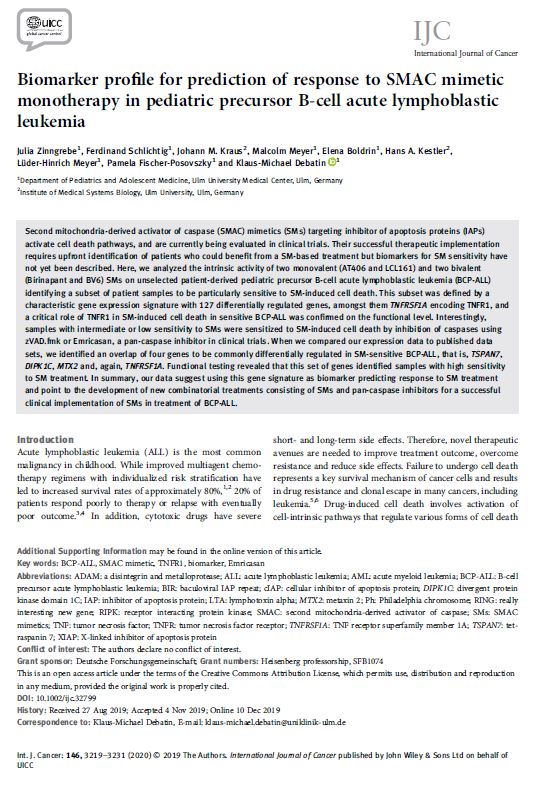 Second mitochondria‐derived activator of caspase (SMAC) mimetics (SMs) targeting inhibitor of apoptosis proteins (IAPs) activate cell death pathways, and are currently being evaluated in clinical trials. Their successful therapeutic implementation requires upfront identification of patients who could benefit from a SM‐based treatment but biomarkers for SM sensitivity have not yet been described. Here, we analyzed the intrinsic activity of two monovalent (AT406 and LCL161) and two bivalent (Birinapant and BV6) SMs on unselected patient‐derived pediatric precursor B‐cell acute lymphoblastic leukemia (BCP‐ALL) identifying a subset of patient samples to be particularly sensitive to SM‐induced cell death. This subset was defined by a characteristic gene expression signature with 127 differentially regulated genes, amongst them TNFRSF1A encoding TNFR1, and a critical role of TNFR1 in SM‐induced cell death in sensitive BCP‐ALL was confirmed on the functional level. Interestingly, samples with intermediate or low sensitivity to SMs were sensitized to SM‐induced cell death by inhibition of caspases using zVAD.fmk or Emricasan, a pan‐caspase inhibitor in clinical trials. When we compared our expression data to published data sets, we identified an overlap of four genes to be commonly differentially regulated in SM‐sensitive BCP‐ALL, that is, TSPAN7, DIPK1C, MTX2 and, again, TNFRSF1A. Functional testing revealed that this set of genes identified samples with high sensitivity to SM treatment. In summary, our data suggest using this gene signature as biomarker predicting response to SM treatment and point to the development of new combinatorial treatments consisting of SMs and pan‐caspase inhibitors for a successful clinical implementation of SMs in treatment of BCP‐ALLWhat's new? SMAC mimetics can activate cell death pathways and are currently undergoing clinical trials for treatment of advanced solid tumors and multiple myeloma. Successful therapeutic implementation would require upfront identification of patients most likely to benefit, but biomarkers for SMAC mimetics sensitivity have not yet been described. Here, the authors identified a highly sensitive subset of B‐cell precursor acute lymphoblastic leukemia (BCP‐ALL) primografts that showed a characteristic gene expression pattern consisting in high TSPAN7, DIPK1C, and TNFRSF1A and low MTX2. The gene signature could potentially be used in the clinic as a biomarker predicting response to SMAC mimetics treatment.