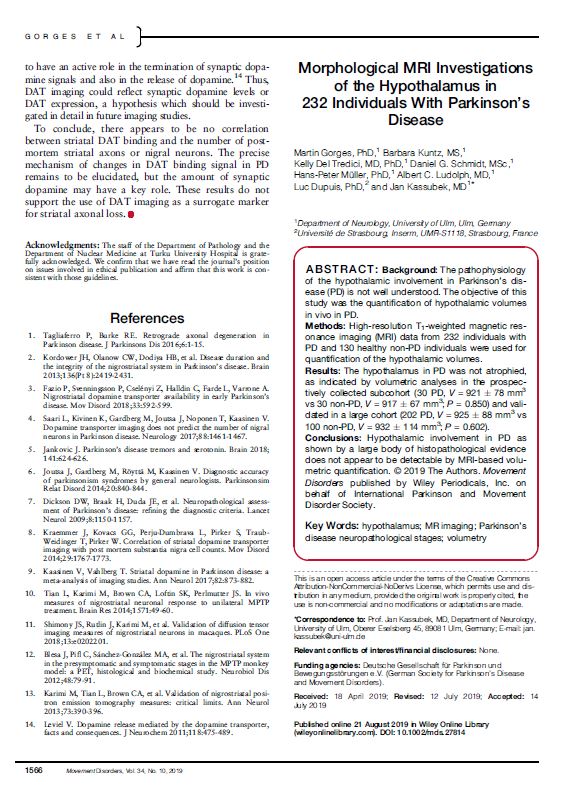 ABSTRACT Background The pathophysiology of the hypothalamic involvement in Parkinson's disease (PD) is not well understood. The objective of this study was the quantification of hypothalamic volumes in vivo in PD. Methods High‐resolution T1‐weighted magnetic resonance imaging (MRI) data from 232 individuals with PD and 130 healthy non‐PD individuals were used for quantification of the hypothalamic volumes. Results The hypothalamus in PD was not atrophied, as indicated by volumetric analyses in the prospectively collected subcohort (30 PD, V = 921 ± 78 mm3 vs 30 non‐PD, V = 917 ± 67 mm3; P = 0.850) and validated in a large cohort (202 PD, V = 925 ± 88 mm3 vs 100 non‐PD, V = 932 ± 114 mm3; P = 0.602). Conclusions Hypothalamic involvement in PD as shown by a large body of histopathological evidence does not appear to be detectable by MRI‐based volumetric quantification. © 2019 The Authors. Movement Disorders published by Wiley Periodicals, Inc. on behalf of International Parkinson and Movement Disorder Society.