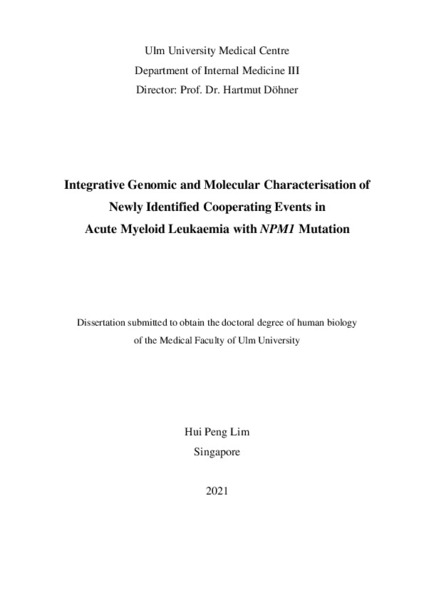 Single genetic aberrations are often not sufficient to cause the onset of cancer, but they contribute to the transformation of normal cells into cells with neoplastic phenotypes and as demonstrated in animal cancer models, they can possibly lead to proliferative diseases and neoplasms. The involvement of at least one additional or multiple additional stochastic genetic mutations is then required for the progression to a tumorigenic state or development into a full-fledged malignancy. Mutations in nucleophosmin (NPM1) affect at least one-third of all adult acute myeloid leukaemia (AML) patients and the disease exhibits broad heterogeneity. Numerous studies have already shown that additional cooperative events in NPM1-mutated AML are needed for its diverse biological and molecular features and variable clinical outcomes. In a seminal study published in 2016, Papaemmanuil and colleagues in collaboration with our group have identified a significant association of protein tyrosine phosphatase, non-receptor type,11 (PTPN11) mutations and 9q deletion with NPM1-mutated AML. In this study, we chose to further examine deletions of the long arm of chromosome 9 [del(9q)]/heterogeneous nuclear ribonucleoprotein K (HNRNPK) and PTPN11 and investigate their functional cooperativity with NPM1 mutations in AML. Through single-nucleotide polymorphism (SNP) microarray profiling of a relatively large cohort of AML patients, we validated the co-occurrence of interstitial chromosomal 9q deletion and NPM1 mutation. Consistent with the findings from previously published studies, we were able to confirm a minimal deleted region (MDR) on chromosome 9q21 that harbours seven genes including HNRNPK. In NPM1 mutated AML patients showing no del(9q), we uncovered recurrent HNRNPK mutations as co-occurring events in NPM1-mutated AML. As these results collectively pointed to an important role of HNRNPK in the pathogenesis of NPM1-mutated AML, we aimed to further characterise the functional role of HNRNPK by performing Clustered Regularly Interspaced Short Palindromic Repeat (CRISPR)/Cas9-induced knockout of HNRNPK in the NPM1-mutated OCI-AML3 cell line. Results from our CRISPR/Cas9 experiments further confirmed our hypothesis that haploinsufficiency might be the mechanism of action, as cell harbouring a complete knock-down of HNRNPK were very hard to generate. In contrast, our short hairpin RNA (shRNA)-based knock-down experiments showed that shRNAs displaying an approximately 50% knockdown of HNRNPK initially conferred a proliferative advantage to the OCI-AML3 cells. While this cell growth advantage could not be sustained in our model, an almost complete knockdown shown by other shRNAs directly resulted in marked reduction in cell growth, in line with our CRISPR/Cas9 knock-outs, which also led to a significant decrease in proliferation of these leukaemia cells. Next, we also studied the impact of PTPN11 gene disruption on NPM1-mutated AML cells by performing a preliminary CRISPR/Cas9-induced knockout of PTPN11 in OCI-AML3 cells and compared the experimental outcome to that of a PTPN11 knockout in OCI-AML5 cells containing a wild-type NPM1. We revealed that CRISPR-mediated knockout of PTPN11 in OCI-AML3 cells led to significant decrease in cell proliferation, but this CRISPR-mediated inhibition of cell growth was relatively more prominent and of greater magnitude in OCI-AML5 cells due to probable dependence on its inherent PTPN11 mutations for cell proliferation and viability. In summary, our comprehensive genomic analyses combined with functional studies using well established cell line models, we have further increased the evidence that mutations affecting HNRNPK and PTPN11 most likely act in concert with NPM1 mutations in leukaemia pathogenesis. Future studies will have to unravel whether these genes are mainly relevant for tumour initiation or whether they are also crucial for leukaemia maintenance. Ongoing transcriptomics and proteomics studies are underway for both HNRNPK and PTPN11 to uncover molecular mechanisms underlying NPM1-mutated AML. These insights might hopefully help to unravel tumour vulnerabilities that can be further clinically exploited by targeting the corresponding synthetic lethality. In accordance, our findings might help to establish biomarker profiles that can predict respective vulnerabilities, which ultimately will lead to improved AML patient outcomes.