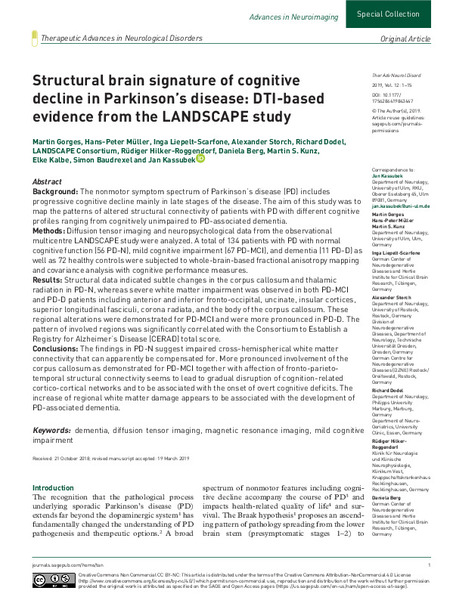 Background: The nonmotor symptom spectrum of Parkinson’s disease (PD) includes progressive cognitive decline mainly in late stages of the disease. The aim of this study was to map the patterns of altered structural connectivity of patients with PD with different cognitive profiles ranging from cognitively unimpaired to PD-associated dementia. Methods: Diffusion tensor imaging and neuropsychological data from the observational multicentre LANDSCAPE study were analyzed. A total of 134 patients with PD with normal cognitive function (56 PD-N), mild cognitive impairment (67 PD-MCI), and dementia (11 PD-D) as well as 72 healthy controls were subjected to whole-brain-based fractional anisotropy mapping and covariance analysis with cognitive performance measures. Results: Structural data indicated subtle changes in the corpus callosum and thalamic radiation in PD-N, whereas severe white matter impairment was observed in both PD-MCI and PD-D patients including anterior and inferior fronto-occipital, uncinate, insular cortices, superior longitudinal fasciculi, corona radiata, and the body of the corpus callosum. These regional alterations were demonstrated for PD-MCI and were more pronounced in PD-D. The pattern of involved regions was significantly correlated with the Consortium to Establish a Registry for Alzheimer’s Disease (CERAD) total score. Conclusions: The findings in PD-N suggest impaired cross-hemispherical white matter connectivity that can apparently be compensated for. More pronounced involvement of the corpus callosum as demonstrated for PD-MCI together with affection of fronto-parieto-temporal structural connectivity seems to lead to gradual disruption of cognition-related cortico-cortical networks and to be associated with the onset of overt cognitive deficits. The increase of regional white matter damage appears to be associated with the development of PD-associated dementia.