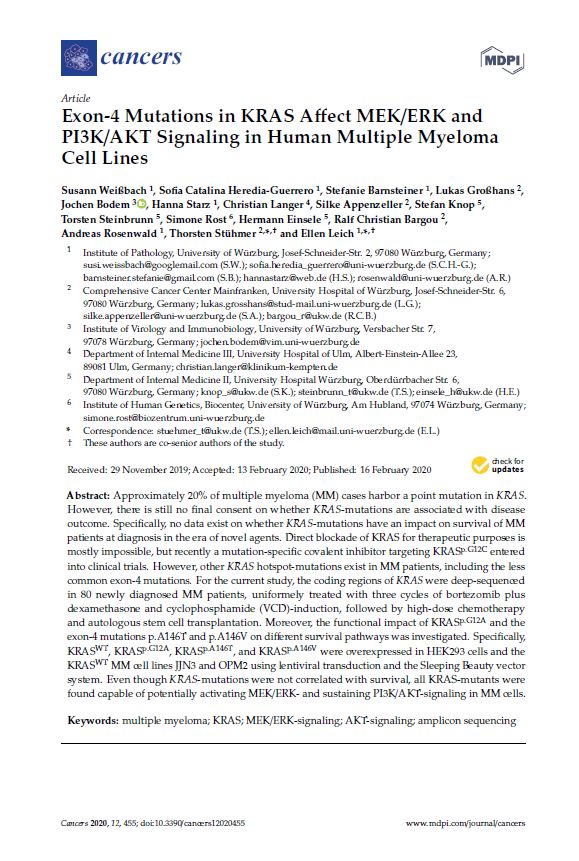 Approximately 20% of multiple myeloma (MM) cases harbor a point mutation in KRAS. However, there is still no final consent on whether KRAS-mutations are associated with disease outcome. Specifically, no data exist on whether KRAS-mutations have an impact on survival of MM patients at diagnosis in the era of novel agents. Direct blockade of KRAS for therapeutic purposes is mostly impossible, but recently a mutation-specific covalent inhibitor targeting KRASp.G12C entered into clinical trials. However, other KRAS hotspot-mutations exist in MM patients, including the less common exon-4 mutations. For the current study, the coding regions of KRAS were deep-sequenced in 80 newly diagnosed MM patients, uniformely treated with three cycles of bortezomib plus dexamethasone and cyclophosphamide (VCD)-induction, followed by high-dose chemotherapy and autologous stem cell transplantation. Moreover, the functional impact of KRASp.G12A and the exon-4 mutations p.A146T and p.A146V on different survival pathways was investigated. Specifically, KRASWT, KRASp.G12A, KRASp.A146T, and KRASp.A146V were overexpressed in HEK293 cells and the KRASWT MM cell lines JJN3 and OPM2 using lentiviral transduction and the Sleeping Beauty vector system. Even though KRAS-mutations were not correlated with survival, all KRAS-mutants were found capable of potentially activating MEK/ERK- and sustaining PI3K/AKT-signaling in MM cells.