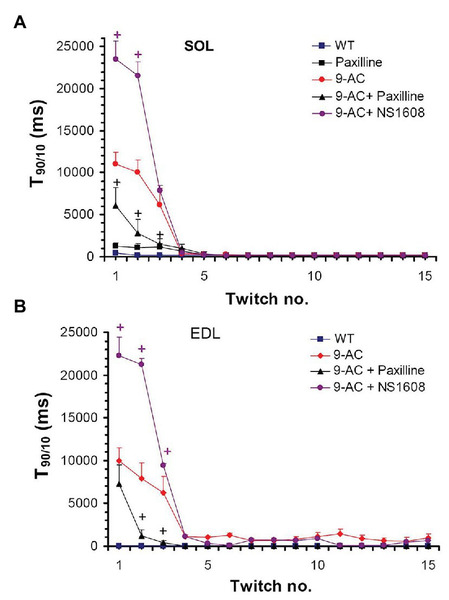 Reduced Cl− conductance causes inhibited muscle relaxation after forceful voluntary contraction due to muscle membrane hyperexcitability. This represents the pathomechanism of myotonia congenita. Due to the prevailing data suggesting that an increased potassium level is a main contributor, we studied the effect of a modulator of a big conductance Ca2+- and voltage-activated K+ channels (BK) modulator on contraction and relaxation of slow- and high-twitch muscle specimen before and after the pharmacological induction of myotonia. Human and murine muscle specimens (wild-type and BK−/−) were exposed to anthracene-9-carboxylic acid (9-AC) to inhibit CLC-1 chloride channels and to induce myotonia in-vitro. Functional effects of BK-channel activation and blockade were investigated by exposing slow-twitch (soleus) and fast-twitch (extensor digitorum longus) murine muscle specimens or human musculus vastus lateralis to an activator (NS1608) and a blocker (Paxilline), respectively. Muscle-twitch force and relaxation times (T90/10) were monitored. Compared to wild type, fast-twitch muscle specimen of BK−/− mice resulted in a significantly decreased T90/10 in presence of 9-AC. Paxilline significantly shortened T90/10 of murine slow- and fast-twitch muscles as well as human vastus lateralis muscle. Moreover, twitch force was significantly reduced after application of Paxilline in myotonic muscle. NS1608 had opposite effects to Paxilline and aggravated the onset of myotonic activity by prolongation of T90/10. The currently used standard therapy for myotonia is, in some individuals, not very effective. This in vitro study demonstrated that a BK channel blocker lowers myotonic stiffness and thus highlights its potential therapeutic option in myotonia congenital (MC).