Recipients of suicide-related disclosure: the link between disclosure and posttraumatic growth for suicide attempt survivors 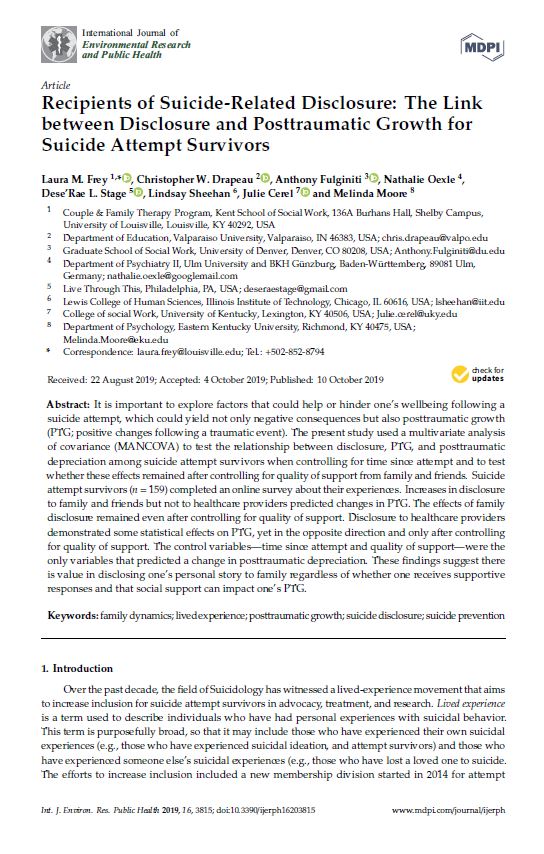 It is important to explore factors that could help or hinder one’s wellbeing following a suicide attempt, which could yield not only negative consequences but also posttraumatic growth (PTG; positive changes following a traumatic event). The present study used a multivariate analysis of covariance (MANCOVA) to test the relationship between disclosure, PTG, and posttraumatic depreciation among suicide attempt survivors when controlling for time since attempt and to test whether these effects remained after controlling for quality of support from family and friends. Suicide attempt survivors (n = 159) completed an online survey about their experiences. Increases in disclosure to family and friends but not to healthcare providers predicted changes in PTG. The effects of family disclosure remained even after controlling for quality of support. Disclosure to healthcare providers demonstrated some statistical effects on PTG, yet in the opposite direction and only after controlling for quality of support. The control variables—time since attempt and quality of support—were the only variables that predicted a change in posttraumatic depreciation. These findings suggest there is value in disclosing one’s personal story to family regardless of whether one receives supportive responses and that social support can impact one’s PTG.