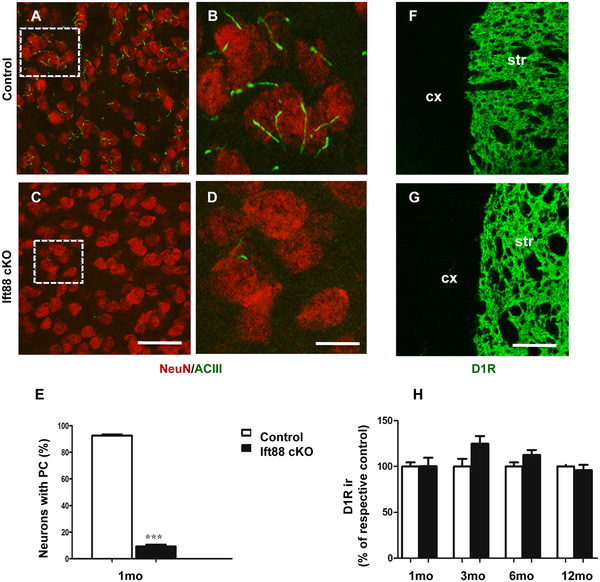 Multiple pathomechanisms triggered by mutant Huntingtin (mHTT) underlie progressive degeneration of dopaminoceptive striatal neurons in Huntington’s disease (HD). The primary cilium is a membrane compartment that functions as a hub for various pathways that are dysregulated in HD, for example, dopamine (DA) receptor transmission and the mechanistic target of rapamycin (mTOR) pathway. The roles of primary cilia (PC) for the maintenance of striatal neurons and in HD progression remain unknown. Here, we investigated PC defects in vulnerable striatal neurons in a progressive model of HD, the mHTT-expressing knock-in zQ175 mice. We found that PC length is affected in striatal but not in cortical neurons, in association with the accumulation of mHTT. To explore the role of PC, we generated conditional mutant mice lacking IFT88, a component of the anterograde intraflagellar transport-B complex lacking PC in dopaminoceptive neurons. This mutation preserved the expression of the dopamine 1 receptor (D1R), and the survival of striatal neurons, but resulted in a mild increase of DA metabolites in the striatum, suggesting an imbalance of ciliary DA receptor transmission. Conditional loss of PC in zQ175 mice did not trigger astrogliosis, however, mTOR signaling was more active and resulted in a more pronounced accumulation of nuclear inclusions containing mHTT. Further studies will be required of aged mice to determine the role of aberrant ciliary function in more advanced stages of HD.