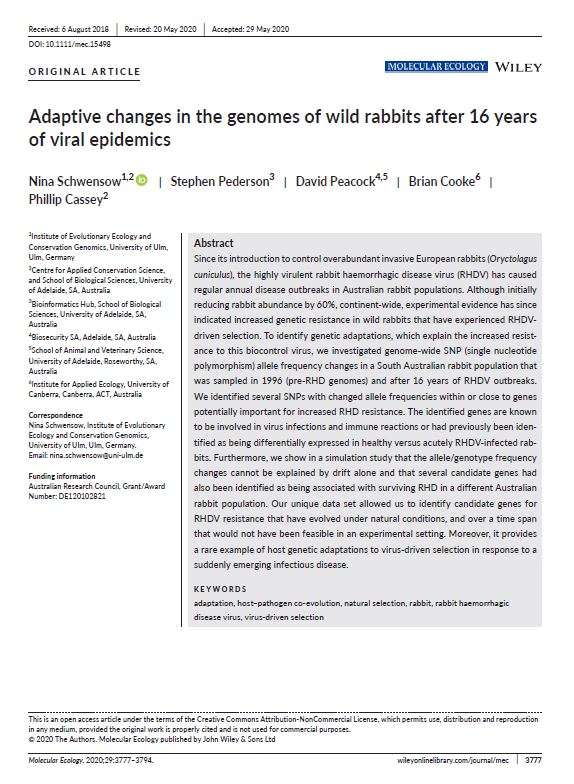 Since its introduction to control overabundant invasive European rabbits (Oryctolagus cuniculus), the highly virulent rabbit haemorrhagic disease virus (RHDV) has caused regular annual disease outbreaks in Australian rabbit populations. Although initially reducing rabbit abundance by 60%, continent‐wide, experimental evidence has since indicated increased genetic resistance in wild rabbits that have experienced RHDV‐driven selection. To identify genetic adaptations, which explain the increased resistance to this biocontrol virus, we investigated genome‐wide SNP (single nucleotide polymorphism) allele frequency changes in a South Australian rabbit population that was sampled in 1996 (pre‐RHD genomes) and after 16 years of RHDV outbreaks. We identified several SNPs with changed allele frequencies within or close to genes potentially important for increased RHD resistance. The identified genes are known to be involved in virus infections and immune reactions or had previously been identified as being differentially expressed in healthy versus acutely RHDV‐infected rabbits. Furthermore, we show in a simulation study that the allele/genotype frequency changes cannot be explained by drift alone and that several candidate genes had also been identified as being associated with surviving RHD in a different Australian rabbit population. Our unique data set allowed us to identify candidate genes for RHDV resistance that have evolved under natural conditions, and over a time span that would not have been feasible in an experimental setting. Moreover, it provides a rare example of host genetic adaptations to virus‐driven selection in response to a suddenly emerging infectious disease.