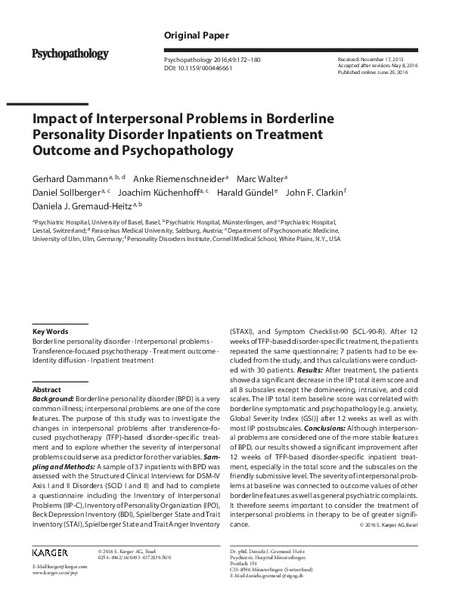 Background: Borderline personality disorder (BPD) is a very common illness; interpersonal problems are one of the core features. The purpose of this study was to investigate the changes in interpersonal problems after transference-focused psychotherapy (TFP)-based disorder-specific treatment and to explore whether the severity of interpersonal problems could serve as a predictor for other variables. Sampling and Methods: A sample of 37 inpatients with BPD was assessed with the Structured Clinical Interviews for DSM-IV Axis I and II Disorders (SCID I and II) and had to complete a questionnaire including the Inventory of Interpersonal Problems (IIP-C), Inventory of Personality Organization (IPO), Beck Depression Inventory (BDI), Spielberger State and Trait Inventory (STAI), Spielberger State and Trait Anger Inventory (STAXI), and Symptom Checklist-90 (SCL-90-R). After 12 weeks of TFP-based disorder-specific treatment, the patients repeated the same questionnaire; 7 patients had to be excluded from the study, and thus calculations were conducted with 30 patients. Results: After treatment, the patients showed a significant decrease in the IIP total item score and all 8 subscales except the domineering, intrusive, and cold scales. The IIP total item baseline score was correlated with borderline symptomatic and psychopathology [e.g. anxiety, Global Severity Index (GSI)] after 12 weeks as well as with most IIP postsubscales. Conclusions: Although interpersonal problems are considered one of the more stable features of BPD, our results showed a significant improvement after 12 weeks of TFP-based disorder-specific inpatient treatment, especially in the total score and the subscales on the friendly submissive level. The severity of interpersonal problems at baseline was connected to outcome values of other borderline features as well as general psychiatric complaints. It therefore seems important to consider the treatment of interpersonal problems in therapy to be of greater significance. © In Copyright http://rightsstatements.org/vocab/InC/1.0/