Snap your fingers! An ERP/sLORETA study investigating implicit processing of self- vs. other-related movement sounds using the passive oddball paradigm 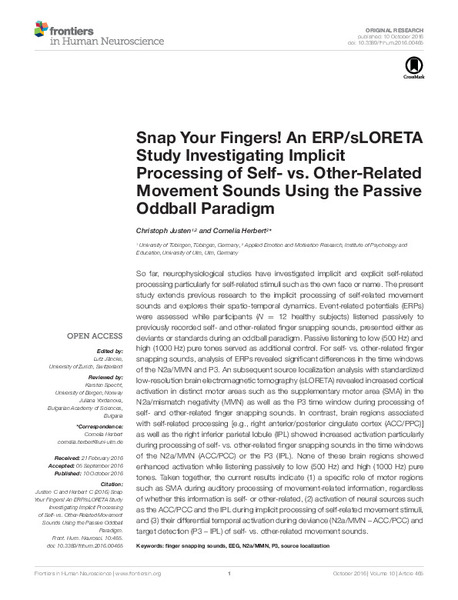 So far, neurophysiological studies have investigated implicit and explicit self-related processing particularly for self-related stimuli such as the own face or name. The present study extends previous research to the implicit processing of self-related movement sounds and explores their spatio-temporal dynamics. Event-related potentials (ERPs) were assessed while participants (N = 12 healthy subjects) listened passively to previously recorded self- and other-related finger snapping sounds, presented either as deviants or standards during an oddball paradigm. Passive listening to low (500 Hz) and high (1000 Hz) pure tones served as additional control. For self- vs. other-related finger snapping sounds, analysis of ERPs revealed significant differences in the time windows of the N2a/MMN and P3. An subsequent source localization analysis with standardized low-resolution brain electromagnetic tomography (sLORETA) revealed increased cortical activation in distinct motor areas such as the supplementary motor area (SMA) in the N2a/mismatch negativity (MMN) as well as the P3 time window during processing of self- and other-related finger snapping sounds. In contrast, brain regions associated with self-related processing [e.g., right anterior/posterior cingulate cortex (ACC/PPC)] as well as the right inferior parietal lobule (IPL) showed increased activation particularly during processing of self- vs. other-related finger snapping sounds in the time windows of the N2a/MMN (ACC/PCC) or the P3 (IPL). None of these brain regions showed enhanced activation while listening passively to low (500 Hz) and high (1000 Hz) pure tones. Taken together, the current results indicate (1) a specific role of motor regions such as SMA during auditory processing of movement-related information, regardless of whether this information is self- or other-related, (2) activation of neural sources such as the ACC/PCC and the IPL during implicit processing of self-related movement stimuli, and (3) their differential temporal activation during deviance (N2a/MMN – ACC/PCC) and target detection (P3 – IPL) of self- vs. other-related movement sounds.