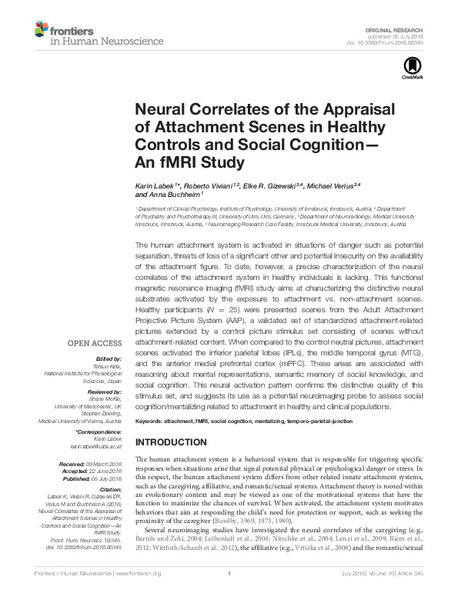 The human attachment system is activated in situations of danger such as potential separation, threats of loss of a significant other and potential insecurity on the availability of the attachment figure. To date, however, a precise characterization of the neural correlates of the attachment system in healthy individuals is lacking. This functional magnetic resonance imaging (fMRI) study aims at characterizing the distinctive neural substrates activated by the exposure to attachment vs. non-attachment scenes. Healthy participants (N = 25) were presented scenes from the Adult Attachment Projective Picture System (AAP), a validated set of standardized attachment-related pictures extended by a control picture stimulus set consisting of scenes without attachment-related content. When compared to the control neutral pictures, attachment scenes activated the inferior parietal lobes (IPLs), the middle temporal gyrus (MTG), and the anterior medial prefrontal cortex (mPFC). These areas are associated with reasoning about mental representations, semantic memory of social knowledge, and social cognition. This neural activation pattern confirms the distinctive quality of this stimulus set, and suggests its use as a potential neuroimaging probe to assess social cognition/mentalizing related to attachment in healthy and clinical populations.