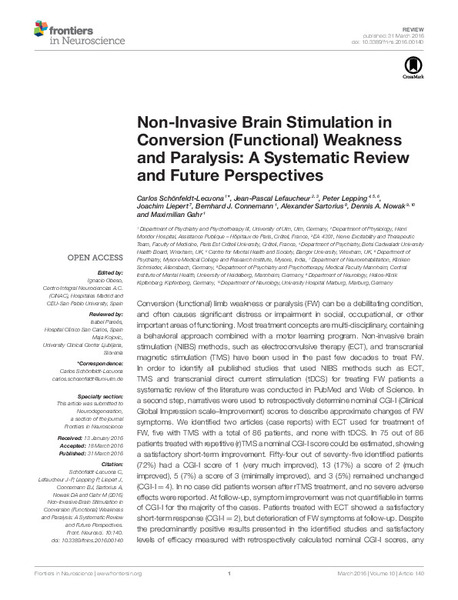 Conversion (functional) limb weakness or paralysis (FW) can be a debilitating condition, and often causes significant distress or impairment in social, occupational, or other important areas of functioning. Most treatment concepts are multi-disciplinary, containing a behavioral approach combined with a motor learning program. Non-invasive brain stimulation (NIBS) methods, such as electroconvulsive therapy (ECT), and transcranial magnetic stimulation (TMS) have been used in the past few decades to treat FW. In order to identify all published studies that used NIBS methods such as ECT, TMS and transcranial direct current stimulation (tDCS) for treating FW patients a systematic review of the literature was conducted in PubMed and Web of Science. In a second step, narratives were used to retrospectively determine nominal CGI-I (Clinical Global Impression scale–Improvement) scores to describe approximate changes of FW symptoms. We identified two articles (case reports) with ECT used for treatment of FW, five with TMS with a total of 86 patients, and none with tDCS. In 75 out of 86 patients treated with repetitive (r)TMS a nominal CGI-I score could be estimated, showing a satisfactory short-term improvement. Fifty-four out of seventy-five identified patients (72%) had a CGI-I score of 1 (very much improved), 13 (17%) a score of 2 (much improved), 5 (7%) a score of 3 (minimally improved), and 3 (5%) remained unchanged (CGI-I = 4). In no case did patients worsen after rTMS treatment, and no severe adverse effects were reported. At follow-up, symptom improvement was not quantifiable in terms of CGI-I for the majority of the cases. Patients treated with ECT showed a satisfactory short-term response (CGI-I = 2), but deterioration of FW symptoms at follow-up. Despite the predominantly positive results presented in the identified studies and satisfactory levels of efficacy measured with retrospectively calculated nominal CGI-I scores, any assumption of a beneficial effect of NIBS in FW has to be seen with caution, as only few articles could be retrieved and their quality was mostly poor. This article elucidates how NIBS might help in FW and gives recommendations for future study designs using NIBS in this condition.