Metabolic Engineering of Corynebacterium glutamicum for Production of UDP-N-Acetylglucosamine 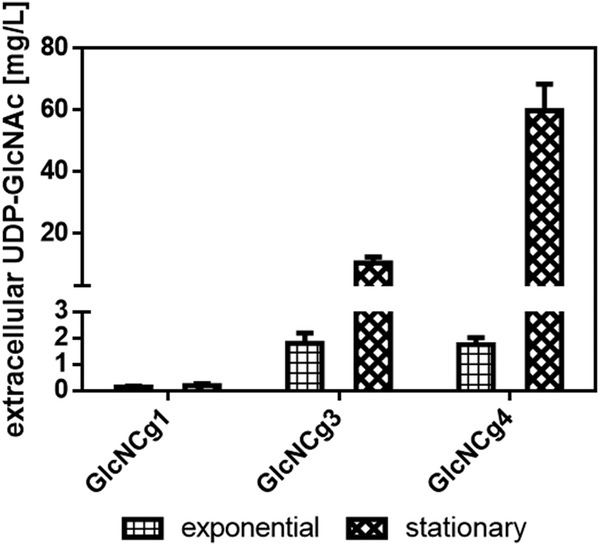 Uridine diphosphate-N-acetylglucosamine (UDP-GlcNAc) is an acetylated amino sugar nucleotide that naturally serves as precursor in bacterial cell wall synthesis and is involved in prokaryotic and eukaryotic glycosylation reactions. UDP-GlcNAc finds application in various fields including the production of oligosaccharides and glycoproteins with therapeutic benefits. At present, nucleotide sugars are produced either chemically or in vitro by enzyme cascades. However, chemical synthesis is complex and non-economical, and in vitro synthesis requires costly substrates and often purified enzymes. A promising alternative is the microbial production of nucleotide sugars from cheap substrates. In this study, we aimed to engineer the non-pathogenic, Gram-positive soil bacterium Corynebacterium glutamicum as a host for UDP-GlcNAc production. The native glmS, glmU, and glmM genes and glmM of Escherichia coli, encoding the enzymes for UDP-GlcNAc synthesis from fructose-6-phosphate, were over-expressed in different combinations and from different plasmids in C. glutamicum GRS43, which lacks the glucosamine-6-phosphate deaminase gene (nagB) for glucosamine degradation. Over-expression of glmS, glmU and glmM, encoding glucosamine-6-phosphate synthase, the bifunctional glucosamine-1-phosphate acetyltransferase/N-acetyl glucosamine-1-phosphate uridyltransferase and phosphoglucosamine mutase, respectively, was confirmed using activity assays or immunoblot analysis. While the reference strain C. glutamicum GlcNCg1 with an empty plasmid in the exponential growth phase contained intracellularly only about 0.25 mM UDP-GlcNAc, the best engineered strain GlcNCg4 accumulated about 14 mM UDP-GlcNAc. The extracellular UDP-GlcNAc concentrations in the exponential growth phase did not exceed 2 mg/L. In the stationary phase, about 60 mg UDP-GlcNAc/L was observed extracellularly with strain GlcNCg4, indicating the potential of C. glutamicum to produce and to release the activated sugar into the culture medium. To our knowledge, the observed UDP-GlcNAc levels are the highest obtained with microbial hosts, emphasizing the potential of C. glutamicum as a suitable platform for activated sugar production.