The influence of action effects in task-switching 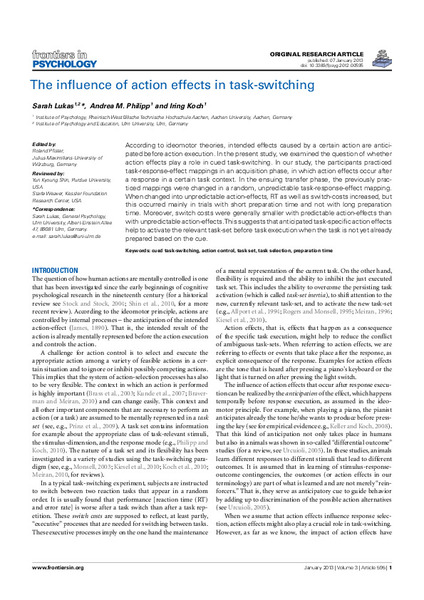 According to ideomotor theories, intended effects caused by a certain action are anticipated before action execution. In the present study, we examined the question of whether action effects play a role in cued task-switching. In our study, the participants practiced task-response-effect mappings in an acquisition phase, in which action effects occur after a response in a certain task context. In the ensuing transfer phase, the previously practiced mappings were changed in a random, unpredictable task-response-effect mapping. When changed into unpredictable action-effects, RT as well as switch-costs increased, but this occurred mainly in trials with short preparation time and not with long preparation time. Moreover, switch costs were generally smaller with predictable action-effects than with unpredictable action-effects. This suggests that anticipated task-specific action effects help to activate the relevant task-set before task execution when the task is not yet already prepared based on the cue.