The Golgi-localized, γ-ear-containing, ARF-binding (GGA) proteins alter the morphology of hippocampal neurons through their interaction with ADP-ribosylation factor 6 (ARF6) 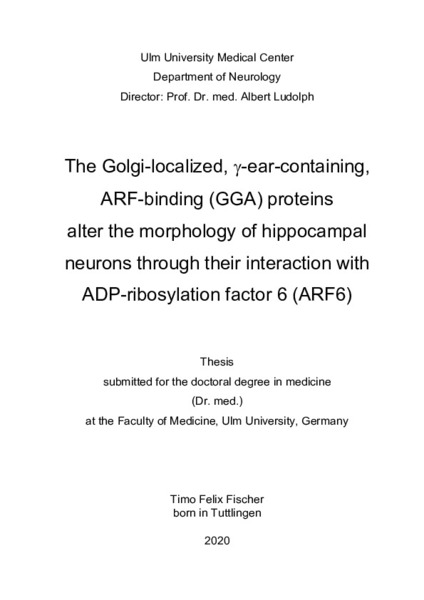 Ever since the establishment of the amyloid hypothesis, a rising number of candidate genes suspected of contributing to Alzheimer’s disease (AD) pathogenesis evolved. These include cellular sorting proteins of the Golgi-localized, γ-ear-containing, ARF-binding (GGA) family and the small guanosine triphosphatase (GTPase) ADP-ribosylation factor 6 (ARF6). It has been shown that both GGA1 and GGA3 protein levels are decreased in the brains of AD patients. In contrast, ARF6 expression was demonstrated to expand throughout the hippocampus during the development of AD. Alongside with the ability of GGA proteins and ARF6 to affect amyloid precursor protein (APP) processing, these properties attracted the interest of neuroscientists. In preliminary studies in our working group, GGA overexpression in primary hippocampal neurons (PHN) by lentiviral transduction evoked a drastic phenotypic change, with a marked decline in neurite length and a shifted dendritic tree architecture. In an effort to narrow down the field of potential contributors to this phenotype, ARF6 comes into focus, and was analyzed together with GGA proteins in the present thesis. To guarantee stable transgene overexpression in PHN, lentiviral vehicles encoding pUltraHot (pU), GGA1/2/3-pU, ARF6-pU and GGA1/2/3-ARF6-pU were produced and purified after the cloning of ARF6-pU and GGA1/2/3-ARF6-pU plasmids was accomplished. Transgene overexpression in transfected human embryonic kidney (HEK) 293 cells and transduced PHN has been proven for all lentiviral constructs via Western Blotting. In addition, Western Blot densitometry confirmed comparable transgene levels between the different constructs. Prior to the morphological analysis of PHN by means of fluorescence microscopy, transduction volumes were calculated for all constructs based on their functional titers determined via flow cytometry, to ensure as similar multiplicities of infection (MOI) as possible. The results of the precursor study were reproduced, since GGA overexpression again evoked a drastically shortened dendritic tree with diminished potential to establish connections to neighboring cells. Intriguingly, simultaneous overexpression of GGA and ARF6, as well as sole overexpression of ARF6, did not only abrogate, but also mostly reverse this phenotype. These findings support available evidence in the literature, which mainly describes a pro-neuritogenic potential of ARF6. In addition, a dominant negative ARF6 mutant mimicked the phenotype obtained in GGA- overexpressing PHN. As an explanatory approach, a direct mechanistic interaction between GGA proteins and ARF6 is hypothesized, resulting in sequestration and functional depletion of ARF6 at the trans-Golgi network (TGN) upon GGA overexpression. The working hypothesis was supported by initial ICC images examining subcellular ARF6 distribution, which was confined to juxtanuclear regions in GGA-overexpressing PHN, possibly representing the TGN. In contrast, ARF6 localization in the neurites was enhanced in neurons simultaneously overexpressing GGA and ARF6, or ARF6 alone. Further experiments are required to clarify the underlying causes of the observed effects on neuronal morphogenesis. Initially, additional immunocytochemistry (ICC) experiments using co-staining of GGA proteins and ARF6 (and desirably confocal microscopy) could help to verify the suspected colocalization of GGA and ARF6 in the case of GGA overexpression. As mentioned above, GGA mutants lacking the GGA and TOM1 (GAT) domain are a promising tool. If their overexpression would abrogate the shortened dendritic tree as well as GGA and ARF6 colocalization, this would further affirm the working hypothesis. Moreover, possible changes in the activity of other ARF6 effectors involved in membrane turnover and thus neuritogenesis could be analyzed, e.g., by means of comparing phosphatidylinositol 4-phosphate 5-kinase α (PI(4)P 5-kinase α) activity or phosphatidylinositol 4,5- bisphosphate (PI(4,5)P2) concentration in GGA-overexpressing, GGA-ARF6- overexpressing and ARF6-overexpressing PHN. On the other hand, factors not directly covered by the working hypothesis must be considered as well. To my mind, the most promising of these factors represents changes in secreted amyloid precursor protein (sAPP) concentrations in the supernatant of PHN. Consequently, an enzyme-linked immunosorbent assay (ELISA) should be performed to exclude opposed effects of GGA and ARF6 overexpression on sAPP production, delivering an alternative explanation for the obtained phenotypes. The proper morphology of a neuron is crucial for the exertion of its inherent functions, and neuronal morphogenesis is affected by many AD relevant genes. Understandably, an improved comprehension of both the functions and interactions of AD relevant genes is an important building block in the effort to develop new therapeutic approaches for this yet incurable, devastating disease. The present thesis intends to make a small contribution to this challenging project.