An affective neuroscience framework for the molecular study of internet addiction 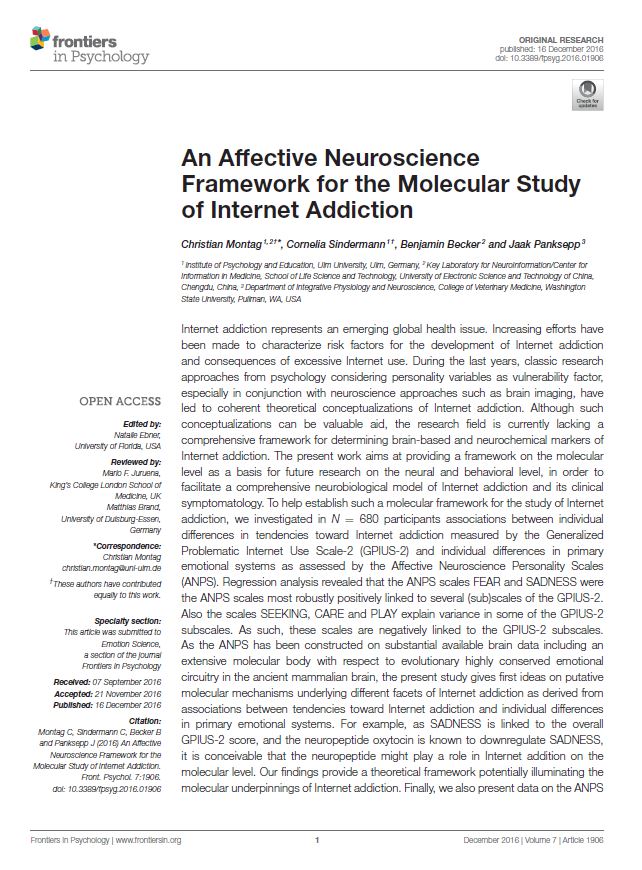 Internet addiction represents an emerging global health issue. Increasing efforts have been made to characterize risk factors for the development of Internet addiction and consequences of excessive Internet use. During the last years, classic research approaches from psychology considering personality variables as vulnerability factor, especially in conjunction with neuroscience approaches such as brain imaging, have led to coherent theoretical conceptualizations of Internet addiction. Although such conceptualizations can be valuable aid, the research field is currently lacking a comprehensive framework for determining brain-based and neurochemical markers of Internet addiction. The present work aims at providing a framework on the molecular level as a basis for future research on the neural and behavioral level, in order to facilitate a comprehensive neurobiological model of Internet addiction and its clinical symptomatology. To help establish such a molecular framework for the study of Internet addiction, we investigated in N = 680 participants associations between individual differences in tendencies toward Internet addiction measured by the Generalized Problematic Internet Use Scale-2 (GPIUS-2) and individual differences in primary emotional systems as assessed by the Affective Neuroscience Personality Scales (ANPS). Regression analysis revealed that the ANPS scales FEAR and SADNESS were the ANPS scales most robustly positively linked to several (sub)scales of the GPIUS-2. Also the scales SEEKING, CARE and PLAY explain variance in some of the GPIUS-2 subscales. As such, these scales are negatively linked to the GPIUS-2 subscales. As the ANPS has been constructed on substantial available brain data including an extensive molecular body with respect to evolutionary highly conserved emotional circuitry in the ancient mammalian brain, the present study gives first ideas on putative molecular mechanisms underlying different facets of Internet addiction as derived from associations between tendencies toward Internet addiction and individual differences in primary emotional systems. For example, as SADNESS is linked to the overall GPIUS-2 score, and the neuropeptide oxytocin is known to downregulate SADNESS, it is conceivable that the neuropeptide might play a role in Internet addition on the molecular level. Our findings provide a theoretical framework potentially illuminating the molecular underpinnings of Internet addiction. Finally, we also present data on the ANPS and smartphone addiction at the end of the paper. Similar to the reported associations between the ANPS and the GPIUS-2, these correlations might provide an initial outline for a framework guiding future studies that aim to address the molecular basis of smartphone addiction.