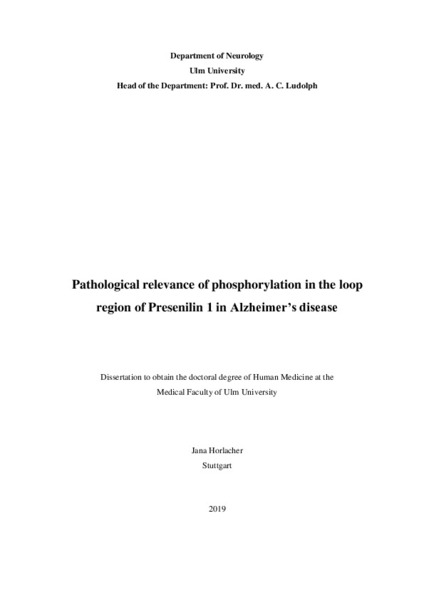 Alzheimer’s disease (AD) is a severe neurodegenerative disease. Presenilin 1 (PS1) is the catalytic core of gamma-secretase, an enzyme complex involved in the production of Amyloid beta peptide (Aβ), which has been proposed to play an essential role in AD. It has been shown that PS1 conformational change leads to an increase of Aβ42/40 ratio, a pathological hallmark of AD. In animal studies, there have been six phosphorylation sites identified necessary for this conformational change, five of them located in the loop region of PS1. The aim of the study was to investigate the importance and pathological relevance of PS1 phosphorylation in human sporadic AD (sAD) brain by using Western Blotting, as well as developing a new Förster resonance energy transfer (FRET) reporter probe to monitor the loop region in response to phosphorylation more closely by using a spectral FRET assay. The results of the study showed a significant increase of phosphorylation levels of PS1 S310 in sAD brains compared to control brains. This contributes to a hypothesized mechanism in which Calcium influx into neurons leads to phosphorylation of PS1, resulting in a pathological conformational change. This eventually leads to a higher Aβ42/40 ratio. Furthermore, correlation analysis of different variables identified brain weight as one factor that significantly correlated with the wide distribution of phosphorylation levels of PS1 S310 in sAD. However, results should be interpreted with caution since it was an observational study. Further research is needed to confirm results. Validating and employing the new FRET reporter probe showed that the two inserted fluorophores changed its proximity in response to phosphorylation enhancing treatment, and simultaneous phosphorylation of five serine residues within the loop region seemed to be necessary. This could reflect a conformational change of the loop region of PS1. Thus, it could serve as a useful probe to monitor phosphorylation and conformational response in the PS1 loop region. However, the construct is a very artificial one unlikely reflecting the entire conditions in vivo and further experiments are needed to validate the construct. Taken together, we could identify a phosphorylation site of PS1 that is significantly increased in human sAD brain compared with controls. Together with previous studies, this suggests that phosphorylation of the loop region seems to be involved in the pathology of human sAD. In this regard, our newly developed FRET biosensor, specifically focusing on the loop region of PS1, could serve as a reporter probe for the conformational change of this region in response to phosphorylation. A new FRET reporter that is also small enough to generate a cell line stably expressing it could pave the way to identify potential PS1 modulators that may have therapeutic implications.