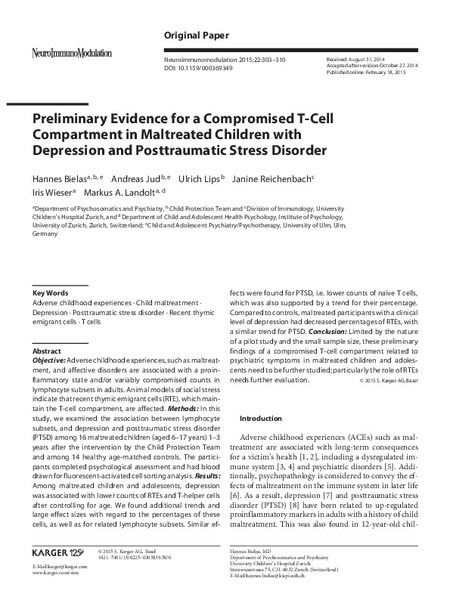 Objective: Adverse childhood experiences, such as maltreatment, and affective disorders are associated with a proinflammatory state and/or variably compromised counts in lymphocyte subsets in adults. Animal models of social stress indicate that recent thymic emigrant cells (RTE), which maintain the T-cell compartment, are affected. Methods: In this study, we examined the association between lymphocyte subsets, and depression and posttraumatic stress disorder (PTSD) among 16 maltreated children (aged 6-17 years) 1-3 years after the intervention by the Child Protection Team and among 14 healthy age-matched controls. The participants completed psychological assessment and had blood drawn for fluorescent-activated cell sorting analysis. Results: Among maltreated children and adolescents, depression was associated with lower counts of RTEs and T-helper cells after controlling for age. We found additional trends and large effect sizes with regard to the percentages of these cells, as well as for related lymphocyte subsets. Similar effects were found for PTSD, i.e. lower counts of naïve T cells, which was also supported by a trend for their percentage. Compared to controls, maltreated participants with a clinical level of depression had decreased percentages of RTEs, with a similar trend for PTSD. Conclusion: Limited by the nature of a pilot study and the small sample size, these preliminary findings of a compromised T-cell compartment related to psychiatric symptoms in maltreated children and adolescents need to be further studied; particularly the role of RTEs needs further evaluation. © In Copyright http://rightsstatements.org/vocab/InC/1.0/ © In Copyright http://rightsstatements.org/vocab/InC/1.0/