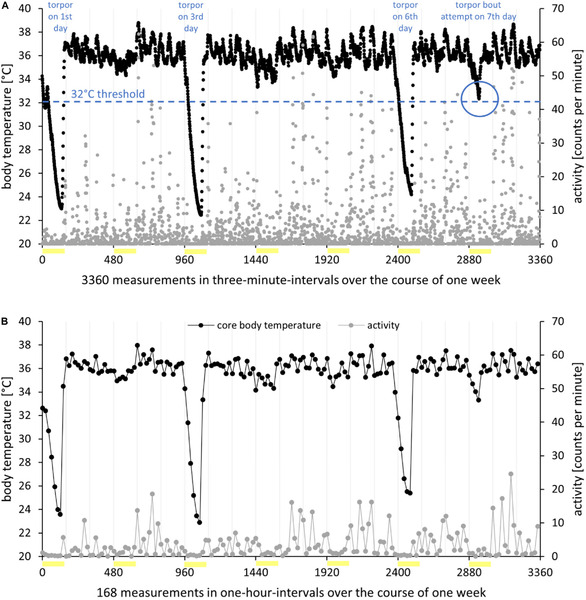 To survive the Siberian winter, Djungarian hamsters (Phodopus sungorus) adjust their behavior, morphology, and physiology to maintain energy balance. The reduction of body mass and the improvement of fur insulation are followed by the expression of spontaneous daily torpor, a state of reduced metabolism during the resting phase to save additional energy. Since these complex changes require time, the upcoming winter is anticipated via decreasing photoperiod. Yet, the extent of adaptation and torpor use is highly individual. In this study, adaptation was triggered by an artificially changed light regime under laboratory conditions with 20°C ambient temperature and food and water ad libitum. Two approaches analyzed data on weekly measured body mass and fur index as well as continuously recorded core body temperature and activity during: (1) the torpor period of 60 hamsters and (2) the entire adaptation period of 11 hamsters, aiming to identify parameters allowing (1) a better prediction of torpor expression in individuals during the torpor period as well as (2) an early estimation of the adaptation extent and torpor proneness. In approach 1, 46 torpor-expressing hamsters had a median torpor incidence of 0.3, covering the spectrum from no torpor to torpor every day within one representative week. Torpor use reduced the body temperature during both photo- and scotophase. Torpor was never expressed by 14 hamsters. They could be identified by a high, constant body temperature during the torpor period and a low body mass loss during adaptation to a short photoperiod. Already in the first week of short photoperiod, approach 2 revealed that the hamsters extended their activity over the prolonged scotophase, yet with reduced scotophase activity and body temperature. Over the entire adaptation period, scotophase activity and body temperature of the scoto- and photophases were further reduced, later accompanied by a body mass decline and winter fur development. Torpor was expressed by those hamsters with the most pronounced adaptations. These results provide insights into the preconditions and proximate stimuli of torpor expression. This knowledge will improve experimental planning and sampling for neuroendocrine and molecular research on torpor regulation and has the potential to facilitate acute torpor forecasting to eventually unravel torpor regulation processes.