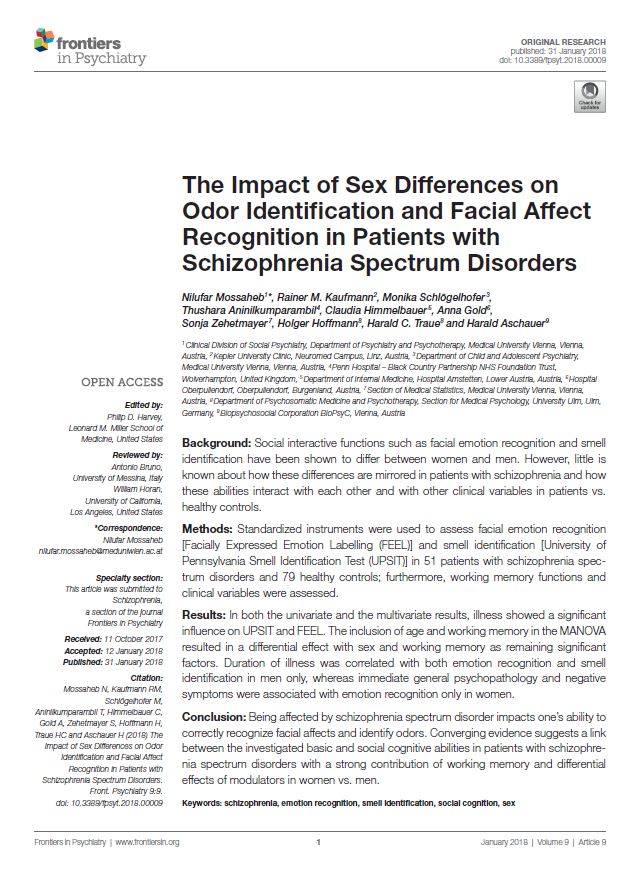 Background: Social interactive functions such as facial emotion recognition and smell identification have been shown to differ between women and men. However, little is known about how these differences are mirrored in patients with schizophrenia and how these abilities interact with each other and with other clinical variables in patients vs. healthy controls. Methods: Standardized instruments were used to assess facial emotion recognition [Facially Expressed Emotion Labelling (FEEL)] and smell identification [University of Pennsylvania Smell Identification Test (UPSIT)] in 51 patients with schizophrenia spectrum disorders and 79 healthy controls; furthermore, working memory functions and clinical variables were assessed. Results: In both the univariate and the multivariate results, illness showed a significant influence on UPSIT and FEEL. The inclusion of age and working memory in the MANOVA resulted in a differential effect with sex and working memory as remaining significant factors. Duration of illness was correlated with both emotion recognition and smell identification in men only, whereas immediate general psychopathology and negative symptoms were associated with emotion recognition only in women. Conclusion: Being affected by schizophrenia spectrum disorder impacts one’s ability to correctly recognize facial affects and identify odors. Converging evidence suggests a link between the investigated basic and social cognitive abilities in patients with schizophrenia spectrum disorders with a strong contribution of working memory and differential effects of modulators in women vs. men.