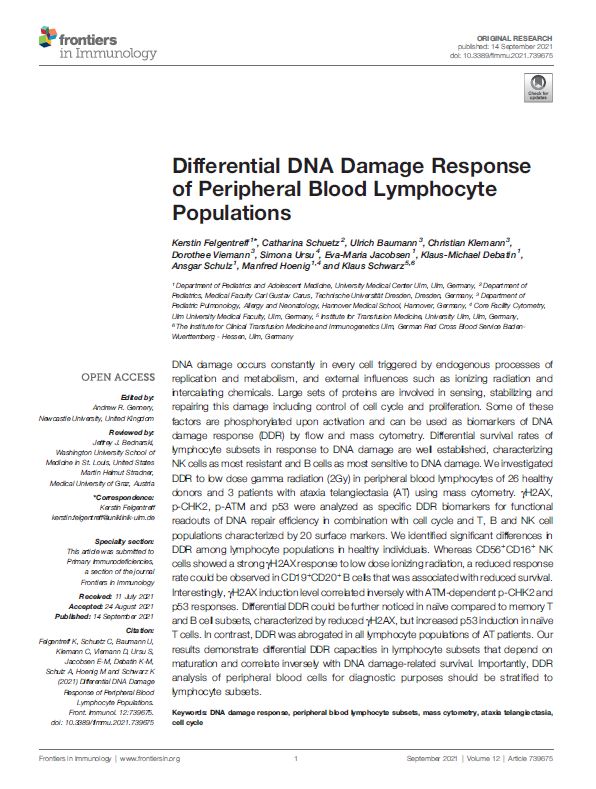 DNA damage occurs constantly in every cell triggered by endogenous processes of replication and metabolism, and external influences such as ionizing radiation and intercalating chemicals. Large sets of proteins are involved in sensing, stabilizing and repairing this damage including control of cell cycle and proliferation. Some of these factors are phosphorylated upon activation and can be used as biomarkers of DNA damage response (DDR) by flow and mass cytometry. Differential survival rates of lymphocyte subsets in response to DNA damage are well established, characterizing NK cells as most resistant and B cells as most sensitive to DNA damage. We investigated DDR to low dose gamma radiation (2Gy) in peripheral blood lymphocytes of 26 healthy donors and 3 patients with ataxia telangiectasia (AT) using mass cytometry. γH2AX, p-CHK2, p-ATM and p53 were analyzed as specific DDR biomarkers for functional readouts of DNA repair efficiency in combination with cell cycle and T, B and NK cell populations characterized by 20 surface markers. We identified significant differences in DDR among lymphocyte populations in healthy individuals. Whereas CD56+CD16+ NK cells showed a strong γH2AX response to low dose ionizing radiation, a reduced response rate could be observed in CD19+CD20+ B cells that was associated with reduced survival. Interestingly, γH2AX induction level correlated inversely with ATM-dependent p-CHK2 and p53 responses. Differential DDR could be further noticed in naïve compared to memory T and B cell subsets, characterized by reduced γH2AX, but increased p53 induction in naïve T cells. In contrast, DDR was abrogated in all lymphocyte populations of AT patients. Our results demonstrate differential DDR capacities in lymphocyte subsets that depend on maturation and correlate inversely with DNA damage-related survival. Importantly, DDR analysis of peripheral blood cells for diagnostic purposes should be stratified to lymphocyte subsets.