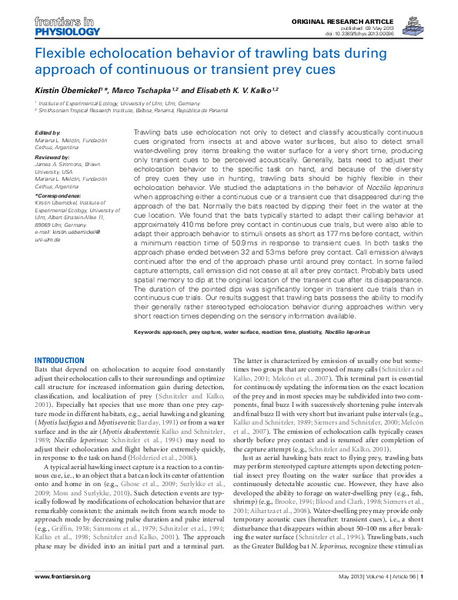 Trawling bats use echolocation not only to detect and classify acoustically continuous cues originated from insects at and above water surfaces, but also to detect small water-dwelling prey items breaking the water surface for a very short time, producing only transient cues to be perceived acoustically. Generally, bats need to adjust their echolocation behavior to the specific task on hand, and because of the diversity of prey cues they use in hunting, trawling bats should be highly flexible in their echolocation behavior. We studied the adaptations in the behavior of Noctilio leporinus when approaching either a continuous cue or a transient cue that disappeared during the approach of the bat. Normally the bats reacted by dipping their feet in the water at the cue location. We found that the bats typically started to adapt their calling behavior at approximately 410 ms before prey contact in continuous cue trials, but were also able to adapt their approach behavior to stimuli onsets as short as 177 ms before contact, within a minimum reaction time of 50.9 ms in response to transient cues. In both tasks the approach phase ended between 32 and 53 ms before prey contact. Call emission always continued after the end of the approach phase until around prey contact. In some failed capture attempts, call emission did not cease at all after prey contact. Probably bats used spatial memory to dip at the original location of the transient cue after its disappearance. The duration of the pointed dips was significantly longer in transient cue trials than in continuous cue trials. Our results suggest that trawling bats possess the ability to modify their generally rather stereotyped echolocation behavior during approaches within very short reaction times depending on the sensory information available.